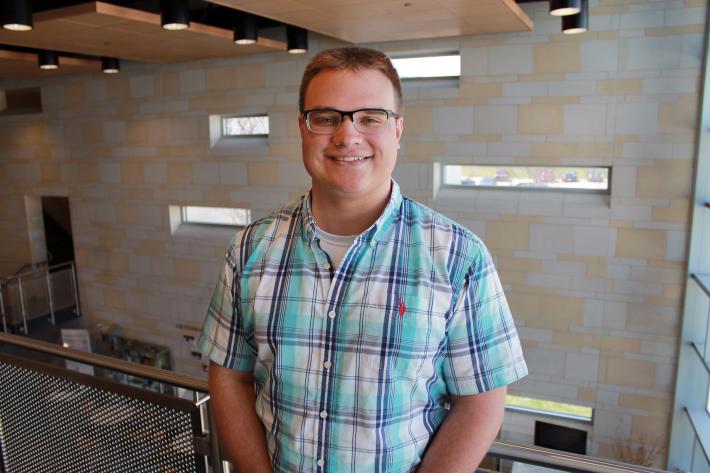 A fascination with some of the more wonderous aspects of math and science led Jakob DeLong into studying engineering at The Ohio State University.

By earning his Ph.D., however, he hopes to give back to society through teaching.

DeLong, an electrical and computer engineering (ECE) student, recently earned the prestigious NASA Space Technology Research Fellowship (NSTRF) for his work in cognitive radar technology as it applies to satellite cloud profiling. He studies under the guidance of ECE Research Assistant Professor Graeme Smith at the ElectroScience Lab.

“The main thrust of research I’m working on is what’s referred to as adaptive or cognitive radar,” DeLong said. “That means we’re taking a radar system and giving it the ability to think. I’m not trying to create the next Terminator; rather, the net result is a new class of radar system, potentially smaller and cheaper.”

Radar systems are typically designed with a fixed set of parameters for an average hypothetical environment, he said. The problem is these systems are still either overcompensating or underequipped in many scenarios, causing wasted energy and efficiency.

“We are taking the traditional static radar system, and allowing it to adapt to its environment,” DeLong said. “We have a system that will, in theory, always work. It doesn’t rely on a human operator checking in on it and telling it what to do next. It can make those decisions itself.”

The point, he said, is to place a cognitive radar system into a satellite for future cloud and weather profiling.

“It’s sending out radio waves and getting a response back. It’s generating a map of what’s going on inside the cloud, whether it’s different kinds of moisture, air currents or particulates,” he said. “From that, we can improve weather forecasting models.”

The ultimate goal, DeLong said, is to place this radar design inside a future NASA CubeSAT, a program in which many small technological test satellites are launched into orbit as a less expensive way to test new innovative Earth science technologies.

“Once I see this project through its completion, it’s just the beginning,” he said. “Anything that uses remote sensors to take a measurement would benefit from something that’s smaller, faster and cheaper. Whether it’s automotive radar or air traffic control. You name it. I can make it better with a cognitive radar.”

As a high school student, DeLong was captivated by magnetics.

“You have this thing that can have an effect on other objects invisibly. I thought that was fascinating,” he said. “By the time I got into college, I matured to a point where I kind of wanted to go into electrical engineering.”

An ECE degree, he said, allowed him to explore the scientific concepts of electromagnetic fields, radiation and designing antennas. He interned in Boston working on ground-penetrating radar as his first exposure to such research.

When it came time to pursue his Ph.D., DeLong said he studied up on universities excelling in electromagnetic research – this led him to Ohio State and assistant professor Smith.

The ultimate goal for him, however, is teaching. While earning his undergraduate degree at Western Virginia University, DeLong spent three years teaching a course in math for his fellow undergraduate students.

“What I found from that experience is that I really enjoy teaching. Fundamentally, it doesn’t matter what belief system you ascribe to, if we’re honest with ourselves, the primary goal of our existence is to help other people,” he said. “There’s nothing better than after working with somebody for a long time to see that ‘ah-ha!’ moment when it all clicks, knowing that I have had a substantial positive impact on somebody. That’s how I am going to help people. I’m getting this Ph.D. so that I can teach at the college level. It is how I am going to give back.”

The goal of NSTRF is to sponsor U.S. citizen and permanent resident graduate students who show significant potential to contribute to NASA’s goal of creating innovative new space technologies to advance the American science, exploration and economic future. Fellowship winners work under a faculty mentor, and collaborate with a NASA expert relevant to their field of study.