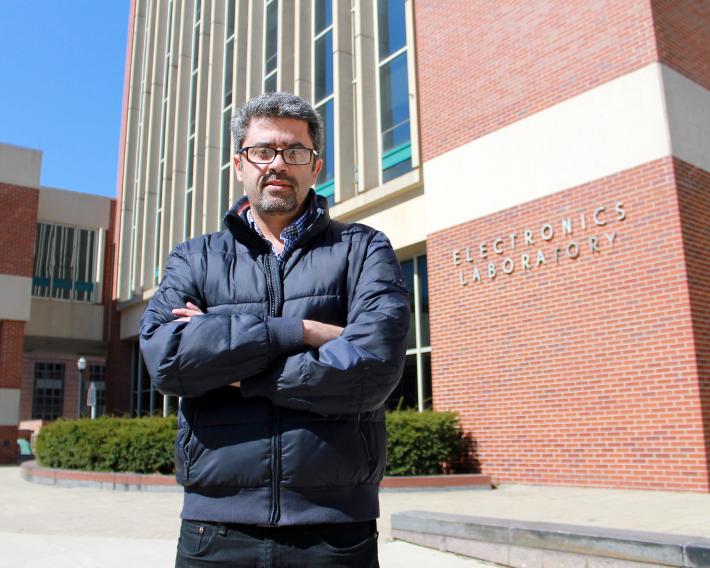 With a background in both industry and academia, professor Hesham El Gamal was appointed to become the new chair of the Department of Electrical and Computer Engineering (ECE) at The Ohio State University, effective September 1, 2018. He succeeds professor Joel Johnson, who has served as chair since 2014.

The ECE chair position is a four-year term. He said Johnson served as an excellent leader for the department and made great strides. As a result, the department is now well-positioned to grow and get to the next level. His goal is to pursue a focus on quality, by empowering students, promoting our culture of diversity and inclusion, while expanding community outreach.

"Whether through research, teaching, or service, we have a lot of strengths in all those areas. Perhaps we can now have a collective discussion on how to capitalize on those," El Gamal said. "I also think we can get more engaged with our community here in Ohio, to be relevant and have an impact."

Another aspect, he said, is further aligning the ECE department with the priorities of the Ohio State College of Engineering and Ohio State as a whole. He wants to ensure students graduate with the confidence they are on par with the top scholars in the world.

"Perhaps we can raise their own expectations, make them more ready for a world that is going to change much faster than in the past," he said.

The Ohio State ECE program is well-regarded nationwide as having one of the most collaborative and supportive environments in academia, he said.

"I strongly believe that we are one of the most friendly and collegiate departments in the nation. We deeply care about the students. That’s very important to me," El Gamal said. "The ecosystem now actually seems ready to go to the next level. I see change that is positive, and we can play a role in that. That will be a big focus for me going forward. To maintain and improve our collegiality, the ability to work together, having harmonious staff and faculty relations."

David B. Williams, dean of the Ohio State College of Engineering, said El Gamal is both innovative and entrepreneurial-minded.

"(He) understands and values the increased role of industrial partnerships in both education and research,” Williams said. “His vision for electrical and computer engineering is appropriately creative and novel, and will build on the legacy of Joel Johnson, who has propelled the department to new heights.”

El Gamal said he values the support placed in him by the dean and the College of Engineering. Over the next six months, El Gamal and Johnson are working together to make for a smooth transition in leadership.

In addition to his role as professor, El Gamal is also the co-founder and CEO of Inmobly, an Ohio State spinoff pioneering artificial intelligence for enhancing mobile video delivery.

While earning his Ph.D in ECE at the University of Maryland at College Park, El Gamal said he worked as a research assistant and taught classes. He then became a senior member of the technical staff of Hughes Network Systems’ Advanced Development Group. He also served as the founding director for the Wireless Intelligent Networks Center and an acting vice president of research at Nile University, Cairo, Egypt.

Ultimately, El Gamal said, his true heart was in academia and teaching. He joined Ohio State as a faculty member in 2001.

Why the switch back to education?

"That's easy. The students. The best thing ever is to find something you said making it into the heads of the students. That’s the big challenge and the big reward at the same time," he said. "Of course, scholarly activity is a big priority for faculty, but in my own view, the big gain is not necessarily in the papers we write, but the change in the students who write the papers."

El Gamal earned numerous recognitions and honors, including Ohio State’s Innovator of the Year Award in 2013 and the National Science Foundation’s CAREER Award in 2004. He was also named a Highly Cited Researcher for four consecutive years (2014-2017) by Clarivate Analytics (formerly Thomson Reuters). El Gamal is a Fellow of IEEE.