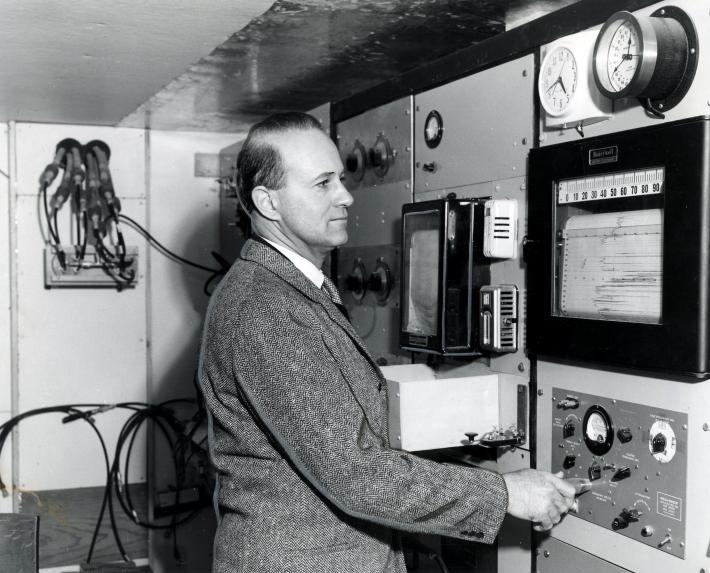 Professor Emeritus John D. Kraus received his bachelor of science (1930), master of science (1931) and Ph.D. (1934) from the University of Michigan. While in college, Kraus became fascinated with the then-recent discoveries of radio noise from space and the potential to use radio waves to “see” the universe. While in school, he also developed innovative antennas like the “W8JK flat topbeam” and the “corner reflector.”

After serving in World War II as a civilian scientist with the navy and working on radar countermeasures at Harvard’s Radio Research Laboratory, Kraus came to The Ohio State University in 1946. During his career he combined the ability to make fruitful discoveries with exceptional skill and generosity in sharing them.

He wrote many articles and widely used textbooks, as well as popular books such as Cosmic Search and Big Ear, which were translated into Chinese, Japanese, Korean, Spanish, Russian and Portuguese. He made presentations at many scholarly conferences and, perhaps most importantly, taught and mentored students, many of whom have said Kraus was one of the best teachers they ever had.

Kraus spent his entire career at Ohio State, where he was the Taine G. McDougal Professor in Engineering. He was a member of the National Academy of Engineering and a fellow of the Institute of Electrical and Electronic Engineers (IEEE). He received the Centennial Medal, the Edison Medal, and the Heinrich Hertz Medal from IEEE.

The Antenna and Propagation Society of IEEE twice awarded him the Distinguished Achievement Award, including in 2003 for “a career of outstanding innovation and invention in the field of antennas, and for the many students he has taught and inspired to excel in electromagnetics.”

One of Kraus’s many successes was the development of the “Big Ear Radio Observatory” and its involvement in the Search for Extraterrestrial Intelligence (SETI). He designed and directed the construction of the Big Ear radio telescope, which discovered some of the most distant known objects at the edge of the universe and conducted sky surveys mapping the radio stars. He also is well-known for inventing the helical antenna, a corkscrew-shaped antenna used in global positioning satellites.

Kraus died in 2004. He is honored each year with the John D. and Alice Nelson Kraus Graduate Student Poster Competition.