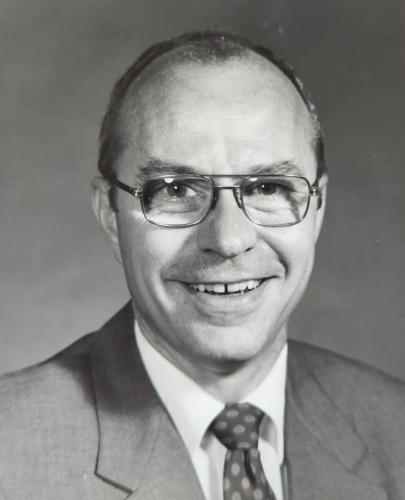 Daniel B. Hodge, who served as the fifth head of The Ohio State University Department of Electrical Engineering (later Electrical and Computer Engineering, ECE) from 1990 to 1993, died July 20 at the age of 83 in Virginia.

Aside from his respected stature as a person and professor, Hodge was instrumental in championing new technological and aesthetic advancements for the department during his time as chair.

Hodge was born and raised in North Manchester, Indiana, and discovered the world of short wave radio in junior high school. Ultimately, this led to his career in electrical engineering. He earned amateur and commercial radio operator’s licenses during high school. His first “real” job was as an announcer and transmitter engineer at WIBC in Danville, Illinois. He also worked part time at radio and TV stations WFBM, WIBC, and WBAA during his undergraduate years at Purdue University. While in graduate school, he worked at Collins Radio and MIT Lincoln Lab during summers. He also met and married Lorraine during graduate school.

Upon completion of his Ph.D., Hodge and his wife spent a year in Oslo, Norway, where he was a Royal Norwegian postdoctoral fellow at the Norwegian Defense Research Establishment. Apart from his role at Ohio State, Hodge served as an electrical engineering faculty member at Purdue, Illinois, and Virginia Tech. Some of his research activities related to the effect of rainfall on radio wave propagation. As a consequence, he also served as a visiting professor of meteorology at McGill University. He served as department head at Virginia Tech's Bradley ECE Department for 8 years, and department chair at Ohio State’s EE Department for 4 years.

Ohio State ECE Professor Stephen Sebo, who knew Hodge since 1968, said his friend and colleague was instrumental in several landmark Ohio State EE developments. Hodge worked closely with then Computer and Information Science (CIS) Chair Mervin Muller on the planning, design and construction phases of a new building. CIS was changed later to Computer Science and Engineering, CSE. The new building was called Dreese Addition, which today houses both ECE and CSE offices and laboratories.

“It was Merv who raised most of the funds for the new building before Dan returned to Ohio State from Virginia Tech. Dan had valuable and very practical experience in leading the expansion of the EE building at Virginia Tech. He utilized that experience at OSU for Dreese Addition,” Sebo said.

Hodge was also helpful in promoting the need for a new High Voltage Laboratory (HVL) at Ohio State. He and Sebo worked on the general concepts and specific details of the new lab together. Sebo said they always agreed on all aspects of the project – as they say, in “supreme harmony.”

Hodge and Muller also worked together on the selection of the artist and the outdoor artwork of what would become the Garden of Constants on the west side of Dreese Addition. It was funded through the “Ohio Percent for Art” project. First, for Dreese Addition, the Ohio State Arts Council had to pick the finalists. Each of the finalists presented a proposal for the artwork, Then, the university arts committee assembled for the Dreese Addition project selected the winning proposal. The artist was Ms. Barbara Grygutis, who is recognized nationally and internationally for her sculptural environments. Her vision was brought to life with massive colorful numbers, and many pavers of mathematical formulas and symbols. Grygutis worked with Hodge, who selected most of the 50 formulas fundamental for electrical engineering as well as for computer engineering. Grygutis recalled recently, how the entire selection process was an excellent exchange of ideas between arts and science.

After retiring from Ohio State in 1993, the quiet life never took hold. Hodge continued finding new roles for the next 15 or so years within his profession. He and Lorraine moved to McLean, Virginia, where he served as a program officer at the National Science Foundation (NSF) and as associate executive director for accreditation at the Accreditation Board for Engineering and Technology (ABET). He was a life fellow of the Institute of Electrical and Electronics Engineering (IEEE) and a fellow of ABET. He received the IEEE Meritorious Achievement Award in Accreditation Activities, the IEEE Meritorious Service Citation, and the NSF Director’s Award for Management Excellence.

Hodge was a consultant to more than 25 companies and government agencies. He also served as a consultant in forensic engineering. In addition, he served as chair of the National Electrical Engineering Department Heads Association and as a member of the IEEE Educational Activities Board.

In 2011, Hodge finally retired, and he and Lorraine moved to Woods Edge, Warm Hearth Village, Blacksburg. There he served on the Board of Directors of the Woods Edge Condominium Association.

As a boy, Hodge enjoyed Boy Scout activities. He earned the Explorer Scout Silver Award while in high school. Later, both he and Lorraine served as volunteer leaders for Indian Guides, Cub Scouts, and Boy Scouts. He was an inveterate collector ranging from hats to antique tools. He took piano lessons as a boy and studied piano at the Jordan Conservatory in Indianapolis. He was pleased when he entered retirement and found that he could recover many of his piano playing skills after lots of years of little practice. He also enjoyed building models, particularly train and ship models. Finally, he enjoyed his friends and family and, particularly, helping them when he could.

A new field of science for global biodiversity