College announces next chair of Electrical and Computer Engineering 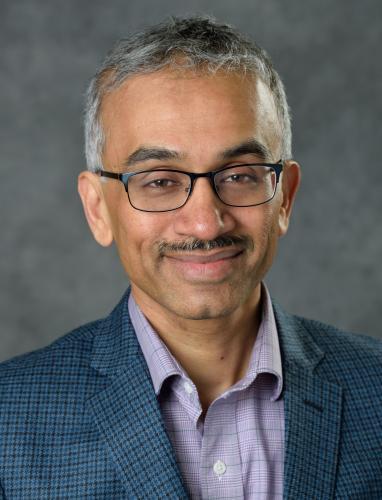 The Ohio State University College of Engineering named Shanker Balasubramaniam as the new chair of the Department of Electrical and Computer Engineering, effective August 1, 2022.

Professor Balasubramaniam comes to Ohio State from Michigan State University, where he is a university distinguished professor – an honor accorded to about 2% of tenure system MSU faculty members – in electrical and computer engineering. He also is an associate chair for research and previously served as associate chair of MSU’s Department of Computational Mathematics, Science and Engineering from 2015-2018.

“An inherent strength of Ohio State is interdisciplinary convergence,” said College of Engineering Dean Ayanna Howard. “Shanker’s vast experience launching and leading collaborative initiatives at Michigan State aligns perfectly with this ethos. He will ensure that the Department of Electrical and Computer Engineering expands its role as a critical university asset in preparing exceptional talent and forming synergistic industry partnerships that cross disciplines.”

“Electrical and computer engineering at Ohio State is the flagship ECE program in the Midwest with multiple points of excellence,” said Balasubramaniam. “And in my specific field of study, Ohio State’s ElectroScience Laboratory has been a unit of envy around the world.

“My interaction with faculty, Dean Howard and Associate Vice President of Research Steven Ringel and learning about their vision for growth, opportunities to lead the nation in critical technologies and the potential to transform education infrastructure sealed the deal.”

He added that his interest in joining Ohio State was amplified upon learning about the university’s new initiatives that will empower eligible students to earn their bachelor’s degrees debt-free.

Balasubramaniam is recognized internationally for his innovative scholarship in computational science as applied to Maxwell’s equations, which describe the world of electromagnetics. He has developed algorithms for solving Maxwell’s equations across multiple scales, with applications to large-scale scattering, antenna design, optics, electromagnetic compatibility, coupled fullwave-circuit analysis, molecular dynamics, surface plasmons, micro-bubbles and quantum dots. The accuracy, stability and low computational complexity of these algorithms have enabled resolution of some unsolved problems in these areas. He has authored or co-authored more than 450 journal and conference papers, and has presented a number of invited talks.

A fellow of IEEE, Balasubramaniam was an associate editor for IEEE Antennas and Wireless Propagation Letters (AWPL) and IEEE Transactions on Antennas and Propagation, and a topical editor for The Journal of the Optical Society of America: A.

He earned his B.S. from the Indian Institute of Technology Madras in 1989, and his M.S. and Ph.D in 1992 and 1993, respectively, from the Pennsylvania State University.