The winners of the 2021 ECE Kraus Memorial Graduate Student Poster Competition are in and the focus of research this year revolves around LiDAR applications.

Light Detection and Ranging, or LiDAR, is a remote sensing method for examining the surface of the Earth. It determines ranges by targeting an object with a pulsed laser and measures the time for the reflected light to return back to the receiver. 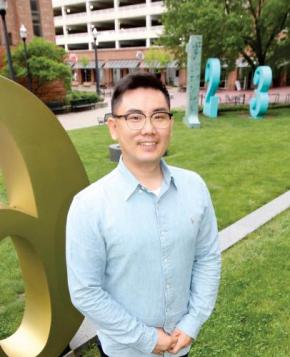 The competition and judge's orientation were both held via zoom again this year. Master’s Program Coordinator Beth Bucher and Assistant Professor of Practice Qudsia Tahmina organized the virtual event this year."It's a new way of looking at the world," he said.

Out of eight total submissions, winning the first place medal and $500 is graduate student SeungHyun Lee for his research work, “Low noise AlGaAsSb avalanche photodiodes for eye-safe LiDAR applications.” He is advised by Professor Sanjay Krishna. Lee previously won a Presidential Fellowship this summer to assist in his research work.

"It's a new way of looking at the world," Lee said. "LiDAR systems capture 3D images using 905 nm lasers as sources and Si avalanche photodiodes (APDs) as receivers. Si APDs are low-cost and reliable, but the wavelength range of these LiDAR systems is limited by Si material to less than 1100 nm. LiDAR at longer wavelengths (1450 and 2000 nm) is eye-safe and has superior atmospheric transmission. To enable LiDAR at this longer wavelength, a high-performance and low-cost receiver APD is needed. This research focuses on technology using III-V compound semiconductors to address this APD technology gap. An AlGaAsSb quaternary semiconductor was identified, designed, and demonstrated to be a promising APD material. The resulting AlGaAsSb APDs have sufficiently low excess noise at a high gain that are comparable to Si APDs.” 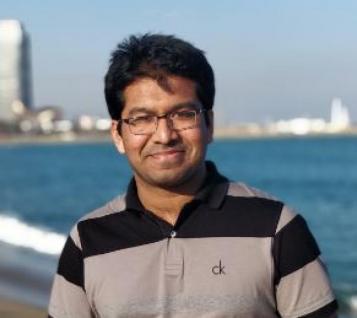 Winning $300 in second place is graduate research associate Riazul Arefin for his work, “Thermally-Stable Quantum Dot Lasers Near the Telecommunication Band for LiDAR.” Arefin is advised by Assistant Professor Shamsul Arafin. The student works in the Optics and Photonics research laboratory (OPREL) and is pursuing his Ph.D.

Arefin said eye-safety and thermal stability are the primary requirements for the light source integrated into a LiDAR system to use in topographic sensing or autonomous vehicles.

"In my work, I have fabricated lasers at eye-safe 1450 nm wavelength range implementing quantum dots (QD) in the active medium. Benefitting from the three-dimensional carrier confinement of the quantum dots, I could achieve a threshold current density as low as 2.7 kA/cm2 and a temperature coefficient of only 0.4 nm/K. Also, my lasers were operational till 100°C. Overall the performance of the quantum dot lasers was much better than their quantum well counterparts,:" he said. 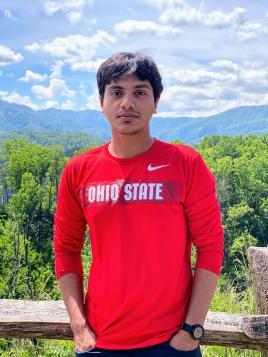 "Modern cars are equipped with a lot of sensors and their placement plays a key role in the performance. This is done by trial-and-error based measurements, which takes a lot of time and costs money," he said. "We are trying to move this to simulations and do the trial-and-errors there, because this is cheaper and faster. We are going to year two of this project where we will use different encrypted radar models to test the method we developed."

The Graduate Poster Competition awards are sponsored by the ECE Department, which recognizes the generosity of the John D. and Alice Nelson Kraus, in whose names the scholarship fund was established.