ECE graduate Maimouna Niang, and the universal language of science 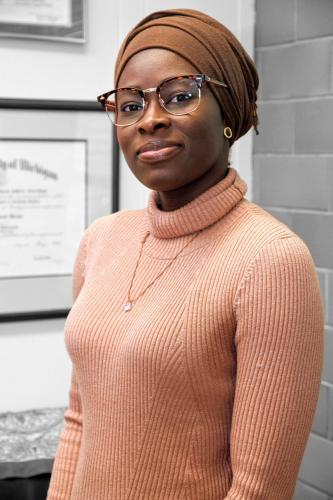 For many international students at The Ohio State University, reaching a level playing field in the classroom means facing language, cultural, and technological challenges typical students do not.

Maimouna Niang’s journey to academia began in Senegal, West Africa. It ultimately led her to Ohio State for an undergraduate degree. In 2020, her hard work paid off and she became one of the newest graduates of Electrical and Computer Engineering (ECE).

While in high school in West Africa, Niang knew she would someday specialize in physics.

“After school, for example, my professor was offering a free physics class at a different institute. I went there twice a week, which made me involved in the engineering field before college,” she said. “When I was accepted in college here in the United States, I was excelling in physics and math, compared to other English-based classes, because English was my second language. Moreover, I had already learned most of the college physics and math classes since high school in West Africa.”

What she has since found is a strength and talent for ECE student research work. Over the past two years, ECE Professor Paul Berger said, Niang worked as his go-to student researcher in the field of flexible electronics.

“Which is remarkable as an undergraduate,” he said. “She was vital in supporting my ECE 5037 Photovoltaics Lab, for which she did not receive credit or compensation.”

While science is a universal language, Ohio State also offers many resources and scholarships to help reduce the challenges international students face. As an undergraduate, Niang won almost $10,000 to help pay for her studies via the Women in Engineering Scholarship, the Matthew T. Williams Scholarship, winning the Wheaton Scholarship twice, plus earning the Engineering Undergraduate Scholarship.

Berger said Niang is now poised to continue at Ohio State as a graduate student in his research group, working toward a Master’s degree.

Niang transferred to Ohio State from the Georgia Institute of Technology. Learning more about semiconductors was key to joining Ohio State’s Solid State Electronics and Photonics team as a graduate student.

“It offers deep understanding at the nanoscale level on how the switches can control the current,” she said. “I was just hoping to work on solid state electronics, since It was something new that I was willing to learn about.”

Every undergraduate student, however, is also only human. Each one is often facing unique challenges, which their professors and peers may never know about.

“I was experiencing deep emotional stress in my marriage,” she said.

“I’ve worked with him since then. He believed in me and offered me high-level experience and knowledge in the semiconductor field,” Niang said.