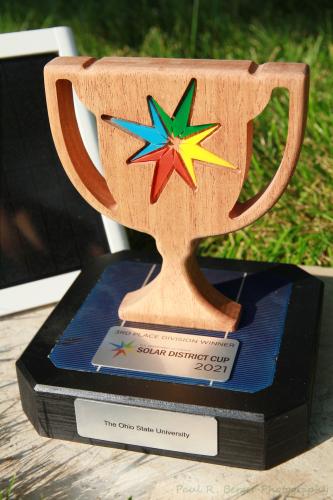 A team of Ohio State engineering students shone brightly at the national level during the Department of Energy’s Solar District Cup.

The annual event challenges multidisciplinary student teams across the nation to design and model optimized distributed energy systems for a campus or urban district.

“That was the inaugural year, and I really felt the need to be part of something so innovative,” she said. “Because of an internship I had at First Solar, I knew how powerful, useful, and sustainable solar panels could be and this competition really helped me explore my interest in them.”

ECE students Andrew Dingle, Mike Gregg, and Grant Homan helped launch the Buckeye team in 2020. The students have since graduated, and Gregg continues on as a graduate student at Ohio State.

To win third place, the Buckeye Solar Team proposed 11 PV systems for the Auraria campus, composed of rooftops, carports, and two small ground-mounted systems totaling 2.95 MW of capacity. The PPA for this aggregate system was $0.056/kWh. Recognizing the challenging economics of installing a community solar system on the City of Denver buildings, Ohio State did not recommend the municipality proceed with this solution.

The Class of 2021 represents students and faculty advisors from 57 colleges, all competing from September 2020 to April 2021 to create new systems for their assigned districts: the City of Denver and Auraria Higher Education Center, the University of Central Florida, and the University of Nebraska – Lincoln.

This multijurisdictional district Ohio State focused on is located at the edge of downtown Denver and is composed of buildings owned and operated by two authorities: the Auraria Higher Education Center and the City of Denver. On the Auraria campus—which houses three co-located universities—student teams had to design behind-the-meter photovoltaic (PV) systems on rooftops and parking lots, as well as a battery storage system to increase campus resilience. On the City of Denver side, students were tasked with designing a community solar system that spanned the rooftops of the Denver Convention Center as well as the Denver Performing Arts Complex that could serve multiple customers across the Denver Metro area.

The first-place winner in the solar design challenge is the University of Puerto Rico, Mayaguez Campus team, and second-place winners participated from the Georgia Institute of Technology.

This work was funded as part of the U.S. Department of Energy Solar Energy Technologies Office FY2019-21 Lab Call through a project with the National Renewable Energy Laboratory.