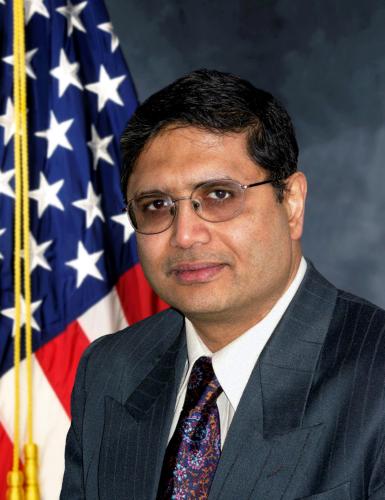 His research provided the NATO community with mathematical tools to address basic research challenges in the area of adaptive radar signal process.

“This award is a culmination of years of research in the exciting direction of convex optimization for adaptive radar,” said Rangaswamy.

“This contribution greatly enhanced the standing of AFRL within the technical community and served as a testament of AFRL leadership in this technical area,” said Rangaswamy. “It affords the Air Force cutting edge tools and technology to address research challenges of DoD importance.”

Rangaswamy’s work for this award was supported by the Air Force Office of Scientific Research, another AFRL entity.

“Congratulations on receiving the NATO Sensors and Electronic Technology Panel Team Excellence Award,” said Brig. Gen. Heather L. Pringle, AFRL commander, in an email to Dr. Rangaswamy. “What an awesome accomplishment. Thank you for being such an incredible ambassador for AFRL!"

As a result of his contributions, Rangaswamy was invited to join the NATO guest lecture series panel which is planned to take place in early 2022.

From the original article: https://www.afrl.af.mil/News/Article-Display/Article/2548400/afrl-sensors-directorate-employee-awarded-nato-set-panel-team-excellence-award/

The Industrial Advisory Board (IAB) is an independent body advising and supporting the chair of the Department of Electrical and Computer Engineering through continual development and improvement of services. Rangaswamy has over 20 years of experience in the conception and execution of basic, advanced, and applied research pertaining to radar phenomenology, radar systems and radar signal processing algorithms.