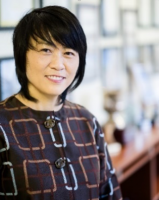 Ohio State ECE alumna Lisa Liying Huang currently serves as the Founder and President of Advanced Engineering Consultants (AEC) (1998 – present). She founded AEC in 1998. The firm initially provided electrical engineering consulting services, but Huang subsequently expanded the company’s services to include providing full mechanical, electrical, plumbing, fire protection, and technology (MEPT) engineering design services. By 2020, her company had grown to 70 employees operating from four office locations including AEC’s headquarters office in Columbus, Ohio. Her company has provided services for numerous projects located in 26 states. AEC has consistently ranked as one of the top Woman-Owned Businesses and largest engineering firms in Central Ohio, as ranked by Columbus Business First. In addition, the company was named to Columbus Business First’s Fast 50 list as one of central Ohio’s fastest growing firms. AEC has also been ranked for several years as one of the Nation’s 100 MEP Engineering Giants by Consulting-Specifying Engineer magazine. Huang drives her team to keep up with new technologies and to provide their clients with superior quality services for design and construction to uphold the firm’s reputation for innovative and practical solutions.

Huang has been the recipient of numerous nominations and awards, including being a Finalist for the Adapt & Innovate Award by the Columbus Chamber of Commerce, a Columbus Visionary Award Finalist by the National Association of Women Business Owners, a Columbus’ Smart 50 award winner, and a Leader Honoree by the Ohio Asian Leaders. Similarly, AEC has received multiple engineering design awards and has been named as one of central Ohio’s best workplaces by its employees.

Huang earned her PhD at The Ohio State University, Columbus, Ohio, USA, in March 1999, specializing in High-Voltage Engineering, and Power Engineering. She earned her MSEE at The University of Manitoba, Winnipeg, Manitoba, Canada, in October 1993; her BSEE at the Huazhong University of Science and Technology, Wuhan, China, in February 1982.