Ayanna Howard named next dean of College of Engineering 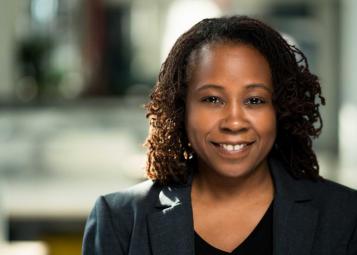 The Ohio State University has hired accomplished roboticist, entrepreneur and educator Ayanna Howard, PhD, as dean of the College of Engineering, the university announced today.

Howard’s appointment as dean, which is subject to Board of Trustees approval, will be effective March 1, 2021. She will also be a tenured professor in the college’s Department of Electrical and Computer Engineering with a joint appointment in Computer Science and Engineering.

Howard joins Ohio State via the Georgia Institute of Technology, where she is chair of the School of Interactive Computing in the College of Computing as well as founder and director of the Human-Automation Systems Lab (HumAnS).

Her career spans higher education, NASA’s Jet Propulsion Laboratory, and the private sector. Dr. Howard is the founder and president of the board of directors of Zyrobotics, a Georgia Tech spin-off company that develops mobile therapy and educational products for children with special needs. Zyrobotics products are based on Dr. Howard’s research.

Among many accolades, Forbes named Dr. Howard to its America's Top 50 Women In Tech list.

“Dr. Howard is an innovator whose skills and passion are a perfect fit with Ohio State’s focus on convergent research and discovery,” said President Kristina M. Johnson. “To attract a leader of her caliber shows both the strength of our engineering program and the acceleration of the university’s overall research mission.”

“As a comprehensive research university, Ohio State provides opportunities for innovations across fields and sectors, with benefits to our students and the broader economy,” said McPheron. “Dr. Howard has the perfect background to advance innovation in the College of Engineering, throughout the university and with industry partners.”

“I’m thrilled to join Ohio State at a time in which there is so much potential to strengthen and build new partnerships in order to expand access and enhance opportunities for the next generation of students, alumni, and for economic development throughout Ohio,” said Dr. Howard.

She will be the first woman to lead the College of Engineering. Nationally, only 17% of engineering deans or directors across the country are female, according to the Society of Women Engineers. Throughout her career, Dr. Howard has been active in helping to diversify the engineering profession for women, underrepresented minorities, and individuals with disabilities.

Dr. Howard will follow Dean David Williams, who announced in May 2020 that he would be stepping down after a decade leading the College of Engineering.

“Dean Williams’ legacy will be felt in the college and throughout the university for years to come,” said McPheron. “Under his leadership, the college emphasized engineering innovation as it expanded academic programs, grew its research portfolio and updated the labs and other spaces where students and faculty learn and discover. Dr. Howard will build on this decade of growth into the future.”

President Johnson and Provost McPheron thank the university committee, led by Executive Dean Gretchen Ritter of the College of Arts and Sciences, that participated in the search for the next dean of the College of Engineering.

From 1993 to 2005, she worked at NASA’s Jet Propulsion Laboratory, where she held multiple roles including senior robotics researcher and deputy manager in the Office of the Chief Scientist. Among other projects, Howard was involved in developing SmartNav — an autonomous, next-generation Mars rover — and SnoMotes, toy-sized robots that can explore icy terrain that is too dangerous for scientists.

She joined Georgia Tech in 2005 as an associate professor and the founder of the HumAnS lab. The lab focuses on humanized intelligence, which uses techniques such as sensing and learning to enhance the autonomous capabilities of robots or other computerized systems. The HumAnS lab has generated more than 250 publications and $8.5 million in principal investigators-led research funding.

Among other roles at Georgia Tech, Dr. Howard was program director of the nation’s first multidisciplinary robotics PhD program; associate chair for faculty development in the School of Electrical and Computer Engineering; and associate director of research at the Institute for Robotics and Intelligent Machines.

In 2013, she founded Zyrobotics to help translate the lab’s research into commercial products for children with special needs. Zyrobotics spun off as a non-profit in 2020.

"I could not imagine a better selection for this role. Ayanna, also known to her colleagues as Wonder Woman, lives up to that name. Ayanna will bring an innovative, dynamic, and entrepreneurial leadership style with a natural empathy that undoubtedly will take the college to the next level.”
M. Brian Blake
Provost and Executive Vice President for Academic Affairs,
George Washington University

“I have had the pleasure to work with Ayanna Howard for decades and have always been impressed by her brilliance as evidenced by her scientific research, her dedication to students of all backgrounds and her unrelentless drive toward academic excellence. Dr. Howard is a visionary, compassionate, empathetic leader.”
Karina Montilla Edmonds
VP and Global Lead for Academies and University Alliances at SAP

“It has been a great privilege to collaborate over the years with Dr. Howard on shared interests and values. Ayanna brings her deep intellect and caring heart to all that she does, with impactful efforts across academia, industry, government, and civil society. A heartfelt congratulations to the students and faculty of Ohio State and Ayanna on her appointment as dean of Engineering.”
Eric Horvitz
Chief Scientific Officer, Microsoft

“Ayanna Howard was the first faculty member I hired when I became chair of the School of Electrical and Computer Engineering at Georgia Tech in 2005. This was one of the best decisions I ever made. I could not be happier to see her become a dean. Ohio State is very fortunate to have her.”
Gary S. May
Chancellor, University of California at Davis

“From a pool of truly outstanding candidates, Ayanna Howard emerged as someone with the vision, skills and orientation to be an outstanding leader for the College of Engineering.”
Gretchen Ritter
Executive Dean and Vice Provost, College of Arts & Sciences
The Ohio State University

“Dr. Ayanna Howard brings her tremendous skill and immense experience in technology and strategic partnership to all her endeavors. She is a sought-after leader who can bring together partners across multiple domains to make advances that have significant benefits for society and business.”
Sophia Velastegui
Chief Technology Officer, AI for Dynamics at Microsoft