When Enam Chowdhury thinks of the universe, he sees an intense connection between our eyes and the light through which we perceive the universe.

A multi-disciplinary assistant professor of Electrical and Computer Engineering, Physics and Materials Science Engineering, Chowdhury just earned a boost in research funding to help explore this connection between light and perception.

His team of engineers and physicists earned a $1.056 million grant from the Air Force Office of Scientific Research for the proposal, “Femtosecond laser induced damage in extremes: from single cycle to atomic resolution.” The four-year project commences in autumn 2020. 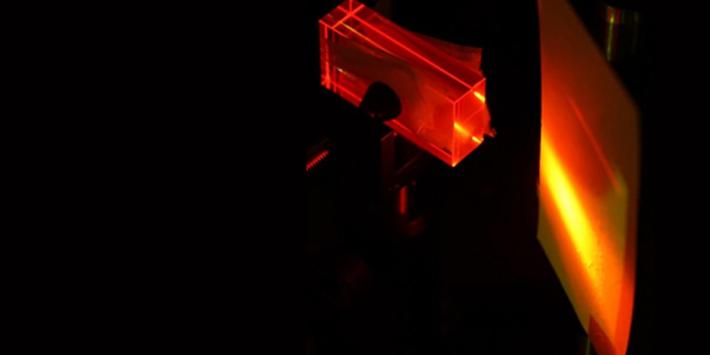 The team will investigate how materials excited by intense laser fields behave on time scales as short as 1 femtosecond (1/1000 of a trillionth of a second) and on spatial scales as small as an atom using next generation, near-single-cycle-pulses and various other laser sources and ultrafast scanning tunneling microscopes (STM). High-performance computing will utilize new algorithms developed by Ohio State's Femto-Solid Laboratory to predict and explain the experimental results.

Chowdhury joined Ohio State in 2004 as a postdoctoral researcher in Physics. In 2006, as a Senior Research Associate, he was given the responsibility to develop a unique petawatt class laser (1000 terawatt) at Ohio State. In 2012, he and his team completed the construction of the 400 TW SCARLET laser system, which was one of the founding members of Department of Energy sponsored LaserNetUS laboratories. This was the first university-built dual CPA (Chirped Pulse Amplification) Ti:Sapphire petawatt class laser in the world.

Chowdhury’s journey into academics began as a child in Bangladesh, where his passion for science first developed through play-experimenting, reading and imagination.

“During my school years in Bangladesh, three books were key to my interest in science and technology,” he said, “a biography of the Wright Brothers, ‘One Two Three...Infinity’ by George Gamow, who discovered how elements formed after the Big Bang, and explained how scientific research opens the unique beauties in nature to our eyes, and Stephen Hawking's ‘A Brief History of Time.’ My participation of yearly science competitions were also a big motivating factor, where I learned that experiments are fun. My science teachers at school played a very active role as well.”

Later, as a university scholar, Chowdhury learned how developing multi-disciplinary talents can provide even further insight.

“Eyes are the windows to the soul, and as humans, we experience the universe by seeing the universe, which means the universe connects to us, arguably the most intense way, through light,” he said. “My field studies how very intense light interacts with matter or materials, and how changes happen within a thousandth of a trillionth of a second."

He said the field has wide ranging ramifications on the fundamental understanding of the universe as well as numerous other applications.

“For example, we still do not know very accurately how extreme materials at the core of the sun interact with light from that region, and my sub-field of research on high energy density materials helps understand the sun better,” Chowdhury said.

“On the optoelectronic side, my research impacts testing, and fabricating new materials via intense-laser materials interaction, functional and dynamic meta-surfaces for photonics applications, and future petahertz electronic devices,” he said. “This fundamental research on extreme laser material modification and damage can be highly controlled when ultra-short time duration laser pulses are used. Such research has had a large impact on society by advancing material processing, modification, surface engineering, opto-electronics and photonics, measurement, manufacturing and surgery."

Members of the Ohio State team include Professors Douglass Schumacher and Jay Gupta from Physics and Alok Sutradhar from Mechanical and Aerospace Engineering.