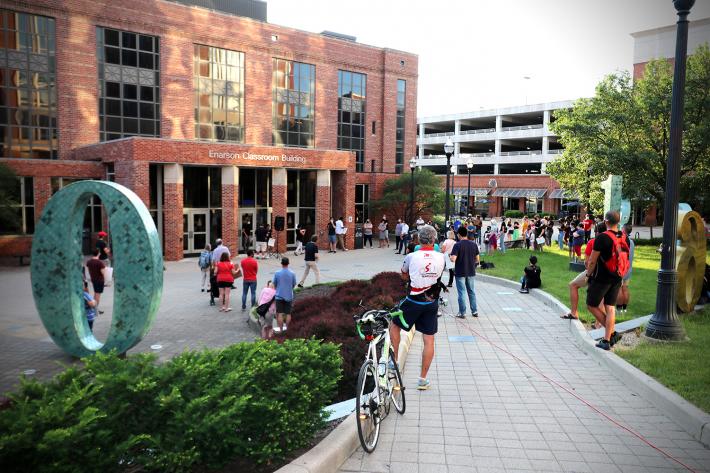 When public artist Barbara Grygutis created the Garden of Constants sculptures adjacent to Dreese Labs at The Ohio State University, she was exploring how colors and numbers change perspectives, revealing new meaning over time.

This is precisely why faculty, staff and students of the Electrical and Computer Engineering (ECE) program held a vigil on the evening of Friday, June 12, to honor George Floyd and the countless other innocent lives lost to senseless brutality. As word of the planned vigil spread, the College of Engineering joined in support.

ECE Chair Hesham El Gamal spoke about the need for real and persistent change, not only in welcoming more people of color into the program, but ensuring their time as students is nurtured rather than unknowingly challenged in any way.

Enrollment numbers for engineering programs predominantly reflect white male students. While the ECE department’s award-winning STEM Outreach program has visited schools and youth programs across Ohio, reaching thousands of students, it can only do so much.

ECE Professor Betty Lise Anderson, who leads the program with student volunteers, already knows the importance of increasing the presence of engineers visiting school districts all across the state, including libraries, clubs and anywhere else they are requested. After schools begin to reopen from the pandemic closures, students interested in volunteering for the program can contact Anderson to assist with upcoming semesters. 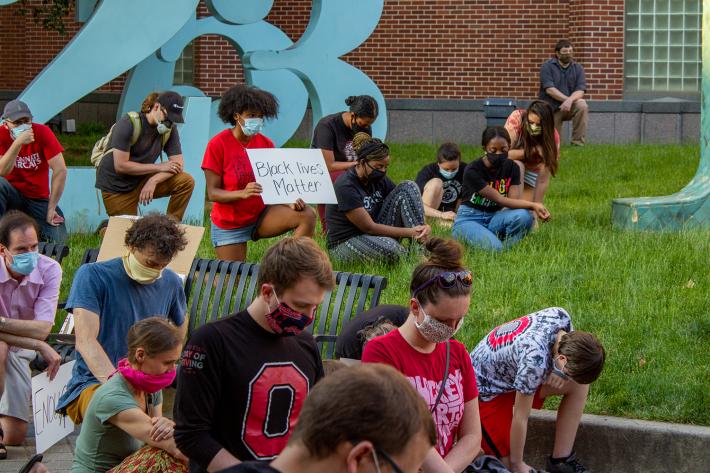 El Gamal said undoing systemic racism is an effort they must work to make happen through real culture change. He said the word culture has its roots in farming. It means to nurture.

“It must touch the lives of all students, staff and faculty. It’s a long process that requires dedication and commitment from us all,” El Gamal said.

Right now, he said, everyone there is trying to live up to this.

Ohio State Chemical Engineering Student and Research Assistant, Jiaoni Li, who spoke at the vigil Friday, said she knows how difficult it is to find a level playing field as a minority student herself. It is even more challenging for black students, she said, to find support or internship opportunities. She hopes the rally is not just about gathering photos and saying some quotes.

“People want to make a change,” she said. “We need solid programs. People don’t realize institutional racism does exist. Education is the foundation for human rights.”

All students should have a platform to show their abilities, she said.

Passino asked the audience to name the woman who was born a slave, but went on to self-educate and earned her Bachelors and Masters in Mathematics at a university in Ohio, where she later taught. As a lifelong activist for civil rights, she published a book on black feminism, became a Ph.D. and even had a commemorative stamp made in her honor. She is known as the Mother of Black Feminism. People should know her name, Anna J. Cooper, and her legacy.

In a statement from ECE faculty, Lecturer Saeedeh Ziaeefard said silence is not acceptable.

“We stand strong with our black community. Black lives must matter. We need to learn to listen, not just hear and speak. We must educate ourselves. Standing by in silence, or not being able to learn are a form of racism. We seek to be better allies. We condemn any form of racial injustice and implore our university administration and the City of Columbus to support all students and citizens,” she said.

Kamila Thompson is majoring in ECE as well as biomedical engineering. She appreciated the statement and support from El Gamal and the department, but spoke about the challenge of being the only voice at the vigil for her classmates affected by racism in the College of Engineering.

Not only was there not enough time for anyone to grieve, Thompson said, they were immediately tasked with organizing protests and speaking on behalf of all black society, in front of a lot of people.

“I’m a student. Not only is it a lot of pressure, but it’s not fair. We are hated on and discriminated against because our skin is brown, and somehow it has become our job to fix it,” Thompson said.

For allies of racial justice, she asked everyone to think about how they may be involved in systemic racism, whether knowingly or unknowingly; to have empathy for people who are hurting right now, to listen to black people trying to explain their experience, and to find more ways to include black people in their lives.

“The most important thing is to not be silent. All of this discussion and all of this action will be for nothing if all of our allies are silent the next time racism presents itself,” Thompson said.