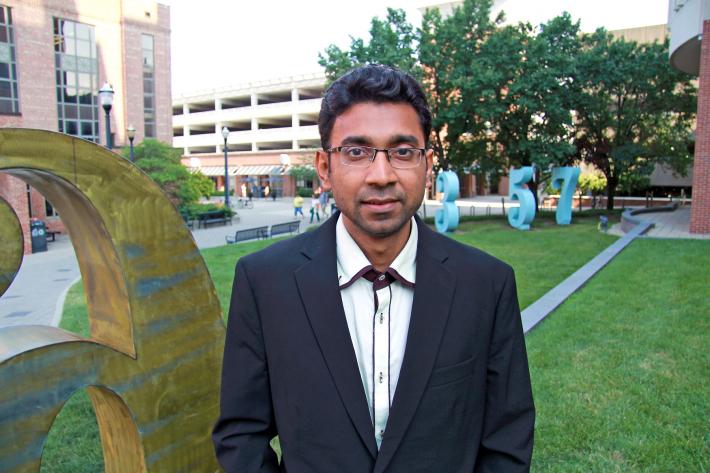 If there is one clear aspect to reveal itself in a post-pandemic world, it is humans need more help figuring out uncertain systems faster. This is where quantum technology comes in.

In this realm where physics and engineering collide, Shamsul Arafin found his niche. For his research efforts at The Ohio State University, he recently earned award funding to help advance the building blocks of quantum technologies.

As an Assistant Professor in Electrical and Computer Engineering, Arafin joined Ohio State’s Materials and Manufacturing for Sustainability (M&MS) Discovery Theme in 2018.

“The long-term objective of the proposed research is to achieve bright and ultra-spectrally pure single-photon sources that meet aggressive performance specifications,” Arafin explains in his abstract.

Single-photon sources are one of most useful basic building blocks for many future quantum technologies. In particular, leading to revolutionary new communications, computing and sensing possibilities, if successfully developed.

To understand the proposal, it helps to explore how Arafin’s passion for learning the foundations of energy was sparked at a young age. This led to a fascination with both electrical engineering and physics, which defines the pursuit of quantum technology.

As Wired reported earlier this month, “Quantum Computers will change the world (if they work).”

Rather than powering computers through strict on/off functions, or the traditional 0/1 method, quantum technology allows for a steady and uncertain flow either way at all times. It could be the answer to efficiently processing big data, and exploring countless options for scientific discovery.

“If you ask a normal computer to figure its way out of a maze, it will try every single branch in turn, ruling them all out individually until it finds the right one,” Wired reports. “A quantum computer can go down every path of the maze at once. It can hold uncertainty in its head.”

This is important because quantum computers could easily outperform the most powerful modern supercomputers. Such technology would rapidly accelerate the development of artificial intelligence, batteries for electric vehicles, solar lighting, cheaper medication and even help find a cure for Alzheimer’s – or, in the current situation, allow for the faster development of vaccines.

“This project aims to develop a single-photon source that can meet these aggressive performance specifications,” Arafin said.

NSF’s EAGER funding mechanism helps power the efforts of research that tests the boundaries of conventional thought. It supports exploratory work in its early stages for untested, but potentially transformative, research ideas or approaches.

Success in this realm could remove constraints leading toward next-generation quantum photonic technologies to advance different disciplines of science and engineering, such as optics, materials science, electrical engineering, physics, and chemistry.

To learn more about related opportunities in this realm of science, explore the Institute for Materials Research and Solid State Electronics and Photonics program.