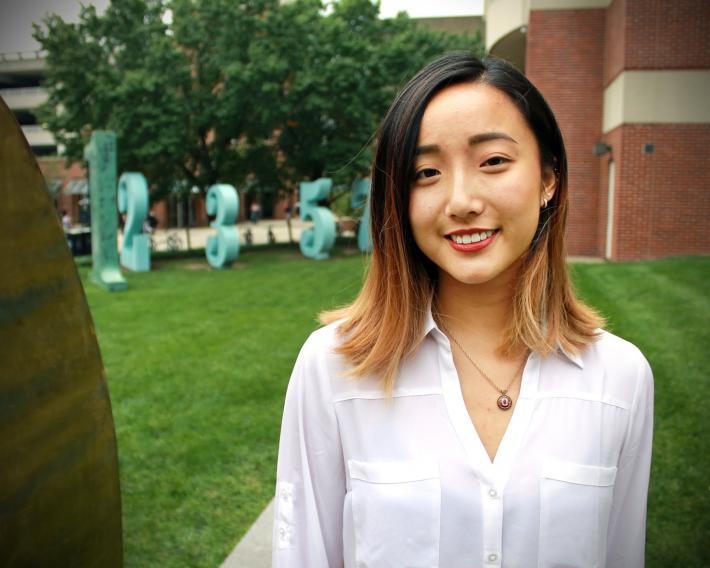 On May 3, 2020, The Ohio State University's College of Engineering will welcome thousands of new alumni into its legacy. To help celebrate their achievements, a few members of the class were highlighted for combining their passions with Ohio State’s offerings to engineer an extraordinary education.

Though the COVID-19 crisis changed their senior year in unimaginable ways, these resilient Buckeyes not only triumphed over hardship, they also learned positive lessons that will benefit them—and us—in the future.

One electrical and computer engineering (ECE) major was among those spotlighted.

ECE student Wenjing Deng likes to be challenged. At Ohio State, the student-athlete was driven to excel in both the classroom and the pool.

Deng helped Ohio State’s Synchronized Swimming team win three straight national championships in 2019, 2018 and 2017. In addition to the overall awards, she was part of the gold medal winners in the team (2017-2019) and trio (2019) categories, plus she was an Academic All-Big Ten Champion and a two-time Big Ten Distinguished Scholar.

“You have to put everything you can into the sport and I like that a lot,” said Deng, who began synchronized swimming at age 9. “I was really pushing my boundaries and exercising myself to be at a high level mentally and physically.”

Originally from Whitby, Canada, Deng wasn’t sure if she wanted to pursue swimming as well as a rigorous academic program like engineering in college. But after receiving a scholarship from Ohio State, she decided to go for it.

Deng was also a Texnikoi engineering honorary officer, an Engineering Ambassador, a member of the 2018 Ohio State Homecoming Court, and completed three internships. But she is most proud of are the teamwork, self-improvement and networking skills she gained as a Buckeye.

“Ohio State has such a wide variety of things to do and I get bored easily, so I’m happy that I was able to get involved in a ton of things outside of engineering,” Deng said. “That was really exciting for me.”

As part of the combined BS/MS program, Deng will receive both bachelor’s and master’s degrees in ECE. It’s a program she highly recommends.

“The professors have really been conducive to our learning. They expect a lot from us, but they give us the time to actually learn it,” said Deng, describing the graduate level classes she took. “The classes are small and we can have a discussion. That’s where I feel I’ve learned the most.”

After graduation, Deng will join automated equipment manufacturer R.P. Gatta near Cleveland. And although the end of her senior year presented another challenge, she has learned from that as well.

“I really like school and I like learning. Knowing that I went to my last lecture and I didn’t even realize it, I wish I enjoyed every moment a little bit more,” Deng said. “It’s important [to be] present and enjoy whatever you’re doing.”

Learn more about four other student graduates to watch.