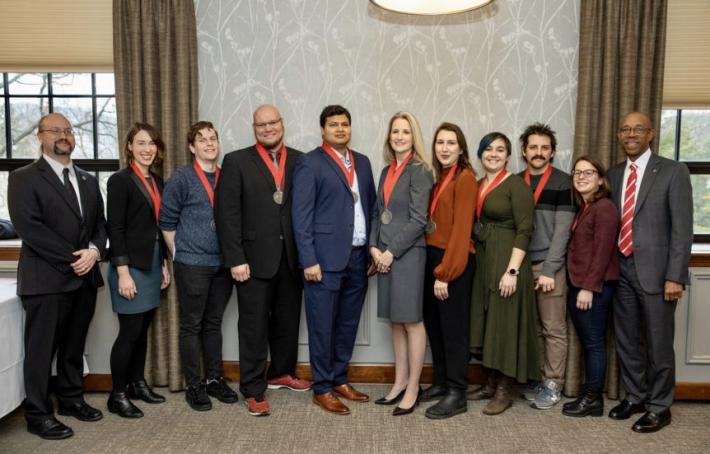 A postdoctoral researcher in the Krishna Infrared Detector (KIND) Laboratory is among the most recent cohort of young researchers welcomed into The Ohio State University’s President’s Postdoctoral Scholars Program.

Nicole Pfiester, a postdoc in Electrical and Computer Engineering (ECE), was honored in February by President Michael V. Drake, who helped launch the program.

The program supports young, highly qualified researchers at Ohio State who aim to be leaders in their fields. The program provides professional development opportunities and faculty mentoring, while the Office of the President and sponsor college provide salary, benefits and program support.

Pfiester is a nanofabrication specialist who came to Ohio State in the summer of 2019. Her faculty mentor is ECE Professor Sanjay Krishna, the George R. Smith Chair in Engineering, who was hired through the university’s Materials and Manufacturing for Sustainability Discovery Theme, operated by the Institute for Materials Research. Krishna heads the KIND Laboratory, in which Pfiester works.

“I am very proud to have Nicole join Ohio State as a President’s Postdoctoral Scholar,” Krishna said. “We worked closely on her mentorship plan. Nicole’s biggest strength is her well-rounded personality that integrates technical depth with a broader perspective of the potential impact of her work in interdisciplinary areas of research.”

With experience in optoelectronic devices and metamaterials, Pfiester focuses on designing the material, shape and size of the sensors so they perform better. 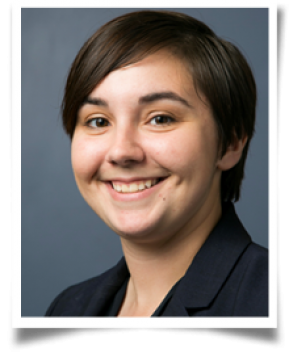 “The cameras in your phone, for example, take an image using visible light. When you get into longer wavelengths, now you’re starting to talk about infrared. We can’t see those, but we have cameras that can,” she said. “We use them for a lot of different applications. You can measure temperatures, you can identify certain proteins and different things based on whether they absorb or reflect light.”

In her latest chapter, at Ohio State, the mentoring and professional development support afforded through the President’s Postdoctoral Scholars Program should prove valuable.

“It helps me to have concrete feedback. I’m really good at identifying ‘Okay, this is a skill I need to work on, how do we improve that?’ So it was important for me to know that if I came to Ohio State, being the way that I am, I was going to be supported and I was going to be helped in that endeavor because, ultimately, it just helps me in the long run,” she said. “[Mentorship] is very important to Sanjay, but it’s important to know that the university also supported it.”

Pfiester isn’t the only researcher representing ECE among the 2019 cohort of President’s Postdoctoral Scholars.

Andreas Fiedler was also honored as a recipient this month. His faculty mentor is ECE professor Siddharth Rajan. Fiedler focuses on the characterization of the formation and the influence of defects on the properties of beta-gallium oxide, or ß-Ga2O3, a promising material for power electronics.