Emre Koksal named 2019 'Inventor of the Year' at BizTech Awards 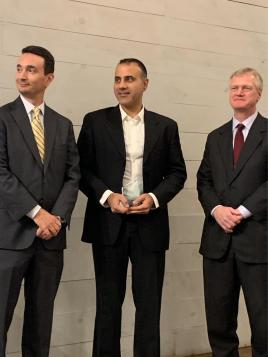 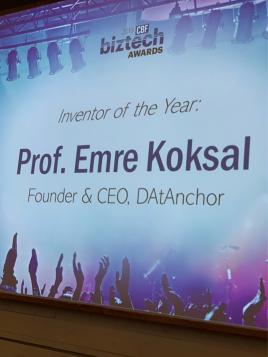 Columbus Business First celebrated its 2019 BizTech Award winners with an event on Dec. 4, and engineering faculty and alumni of The Ohio State University's Department of Electrical and Computer Engineering (ECE) were in the spotlight.

ECE Professor Emre Koksal, cofounder and CEO of the cybersecurity company DAtAnchor Inc., was named "Inventor of the Year," at the ceremony held at Vue Columbus in the Brewery District.

DAtAnchor helps organizations protect and store their data through automated cryptotechnology, blocking it against breaches while meeting compliance requirements of regulated industries.

“If you look at all serious breaches, at some point there’s a human error,” Koksal told Business First. “You cannot control the behavior of humans. If you look at the Equifax breach, the Target breach, it starts with someone making a mistake. We eliminate that initial mistake.”

Koksal developed DAtAnchor with a $70,000 grant under a commercialization program jointly funded by Ohio State and Ohio Third Frontier.

ECE faculty Chi-Chih Chen serves as lead inventor and Professor Robert Lee serves as a director and founding partner on the company's Advisory Board, which also includes alumnus Rodolfo Bellesi.

The Innovation Studio at Ohio State's College of Nursing also won "Nonprofit of the Year."