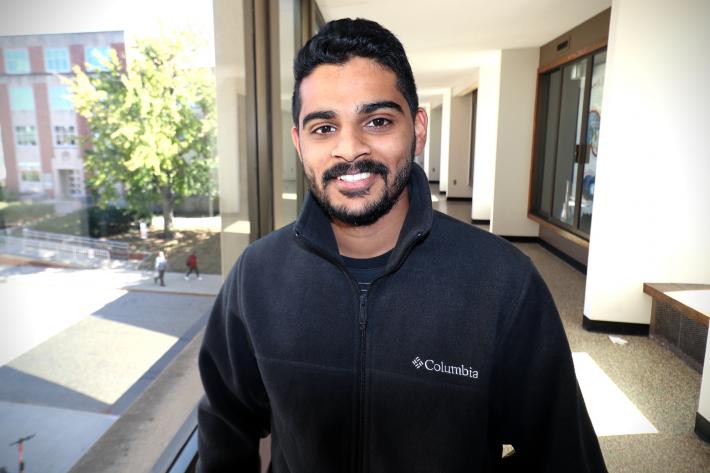 Specifically, Kalarickal won the Outstanding Student Talk Award, chosen by a committee consisting of conference program and advisory members. Winners are selected by their "significant impact on the advancement of technology in materials research, device development, device commercialization or equipment development."

The NAMBE conference is dedicated to Molecular Beam Epitaxy (MBE) of semiconductor research, Kalarickal said, which is one method of growing high-quality thin films for semiconductors.

While earning his doctorate, Kalarickal said, his research is focused on MBE growth of gallium oxide based heterostructures for high power applications. He said the conference provides an ideal spot for networking.

“As an MBE grower working on Gallium oxide growth at The Ohio State University,” he said, “NAMBE provided an excellent platform to meet other MBE growth experts and present my work in front of them.”

His award-winning presentation at NAMBE was titled “Mechanism of Si doping in Oxygen plasma assisted MBE (PAMBE) growth of gallium oxide.” He is currently a student in Professor Siddharth Rajan's group at Ohio State.

“Gallium oxide is an emerging ultra-wide band gap semiconductor with immense potential for applications like high power transistors,” Kalarickal said. “Doping is the process of introducing charge carriers into a semiconductor and controlling the process, which is imperative in realizing high quality semiconductor devices. In this work we tried to explain the mechanism of doping gallium oxide using Si in oxygen plasma MBE growth by considering the high temperature interaction of Si with oxygen plasma.”

From here, Kalarickal said, his career plans are wide open for opportunity.

“I haven't really decided, but I'm starting to get a little biased towards working in the industry,” he said.