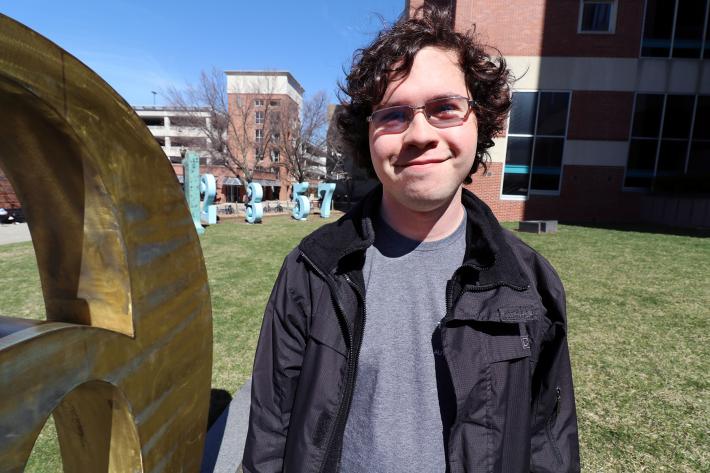 Blaine Miller, a second-year in computer and electrical engineering, was surprised to find the leadership on the Underwater Robotics team nominated him for the APTIV scholarship.

However, finding out he was just one of two people awarded this scholarship was even more surprising. The Center for Automotive Research (CAR) at The Ohio State University is internationally known for its deep pool of engineering talent.

The APTIV scholarship, worth $1500, honors two engineering students involved in motorsports who display the qualities of talent and innovation.

“I was pretty excited,” Miller said about being awarded the scholarship. “I was mostly surprised because I didn’t expect to be one of the people to be nominated through CAR because there are a lot of teams there that all do really well.”

The Underwater Robotics team creates autonomous submarines used in competitions. Some projects for the submarines include programming the electronics to ensure effective communication and creating a module that tells where sounds come from.

Miller is currently the electronic lead for the team, overseeing the electronics on projects and teaching other team members. He joined the team because he wanted to be involved in robotics on campus - even though he wasn’t specifically interested in underwater vehicles. He has since enjoyed the challenge the team gave him.

“I’m interested in robotics just because it’s a challenge,” Miller said. “You have to put mechanics and make them move with electronics and put all the electronics to do everything you want. It’s just a nice combination of things talking to each other and working smoothly.”

The Underwater Robotics team also allows Miller to gain experiential knowledge from hand-on submarine work. He can later apply this to ECE courses he takes, such as the signal analysis class.

“I’ve been one step ahead in the robotics team for all of my classes, so I go into class and get a formal education on the stuff I’ve had a little bit of dabbling in,” Miller said. “It’s just a good all-around education because I’ve got the experience and I’ve got the equations for all of it. I feel really confident that I know everything that I’m being taught in class.”

Being part of the Underwater Robotics team is one of the best experiences Miller has had at the university, providing a thriving and collaborative team environment.

Miller said the scholarship will help provide him with a little relax time too. With the extra money, he can decrease his hours at work and focus more on robotics.

“Lately I have been nonstop with work and school," he said. "With this scholarship, I don't need to work as much and I can focus on what I want to do, build robots and help teach people how to design electronics.”

APTIV is a global technology company that develops safer, greener and more connected solutions, which enable the future of mobility. The company has 147,000 employees and operates 14 technical centers, as well as manufacturing sites and customer support centers, in 45 countries.