Posted: January 11, 2019
Across the globe, millions of people still live without clean water every day. A professor at The Ohio State University, however, made it his mission to make an impact through humanitarian engineering – one village at a time.

Paul Berger, a professor of electrical and computer engineering at Ohio State, said the land within the La Guajira peninsula desert of Colombia is so dense with salt even the groundwater is brackish and undrinkable.

According to the Washington Post, as many as 5,000 Wayúu children, the most vulnerable of the population, have died over the past decade from malnutrition and lack of medical care. Mining in the region also contaminated groundwater and dried up village wells.

As a visiting professor to the Universidad del Norte in Barranquilla, Colombia, Berger saw an opportunity to team up with a group of regional professors, Uninorte’s Institute of Electrical and Electronics Engineers (IEEE) student chapter and local stakeholders to focus on helping the indigenous Wayúu people.

Leveraging his role within the IEEE Electron Device Society, Berger (Co-PI) and the team earned a $48,000 Humanitarian Activities Committee (HAC) grant to proceed with an exploratory project to supply the Wayúu communities with fresh and potable water through the development of a solar powered desalination plant.

Neil Mendez Turizo is the group’s direct contact within the La Guajira peninsula and the local government. He is a Support and Infrastructure for Renewable Energies Specialist in the State of La Guajira and a specialist in renewal energy from Servicio Nacional de Aprendizaje (SENA), a nationwide workforce training network in Colombia.

As the Smart Village project gets underway, Mendez said, the team was happy to see the Colombian government in the region throw in its support as well.

“Neil and I will work with the invaluable Uninorte IEEE students to implement this 2019 project in La Guajira, working closely with the local Wayúu people,” Berger said.

This project could be just the beginning of development toward a larger smart-grid system for further renewable energy opportunities on the arid peninsula, he said. Their reverse osmosis prototype, with an intended home-built Tesla power wall, will also feature truck delivery to inland communities for a larger coverage of water supply in the various indigenous reservations located in the semi-desert, coastal zones in the low, middle and high Guajira desert. 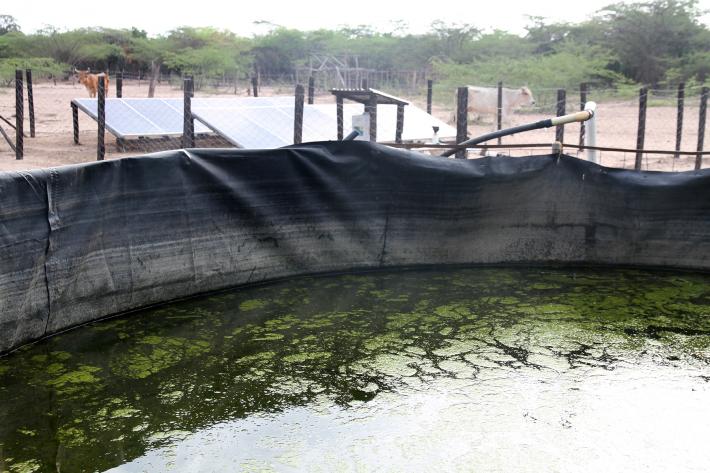 Berger said their aim is to create a robust design requiring minimal maintenance, low operational costs, which is also easily operated by trained members of the local Wayúu community.

Mendez said the Wayúu people remain enthusiastic about the plans.

“The execution of this project model is unprecedented in our region,” he said. “Our region is a privileged territory with excellent average solar radiation for the generation of clean electric energy.”

Building La Guajira toward a power grid system, Mendez said, will lead to its replication in other communities with similar issues and the expansion of other renewable-energy solutions up through the La Guajira peninsula.

Oliveros, project collaborator and Universidad del Norte professor, is conducting research to determine the efficacy of load analysis for micro-grid technology, which incorporates a range of renewable energy sources, such as solar and wind. Her preliminary research shows there is even greater opportunity for renewable energy sources in the La Guajira peninsula, particularly wind power due to the favorable trade winds from the Caribbean ocean.

The research team continues to work closely with the Wayúu people to further understand how to cater the project best to their community.

Leaders in the Wayúu community are transparent in their main objective to have an electrified center in each village. These centers would allow the culture and community to thrive and serve as a home base for teaching traditions such as local weaving crafts and Wayúu language.