Posted: December 10, 2018
The Ohio State University’s ElectroScience Laboratory (ESL) celebrated its top faculty and staff accomplishments of 2018 during its annual awards event Dec. 6 at the Blackwell Inn on campus.

Find pictures from the event here.

Based on Kinnear Road, ESL is a major center-of-excellence in Ohio State’s College of Engineering. Established in 1942, it remains one of the largest radio frequency and optics research laboratories in the world.

ECE alumnus Eugene Lee said it was an honor to work under Walton’s mentorship as a graduate student at Ohio State for almost a decade.

“I spent six years as his graduate student and many years as his research colleague. Eric has been there for me, not only professionally, but personally as well. I am the engineer I am today because of Eric Walton,” Lee said.

ECE alumna Dana Kohlgraf-Owens said she was an undergraduate working with Walton in 2004-2005. His mentorship helped her on the path toward an engineering career she has enjoyed ever since. 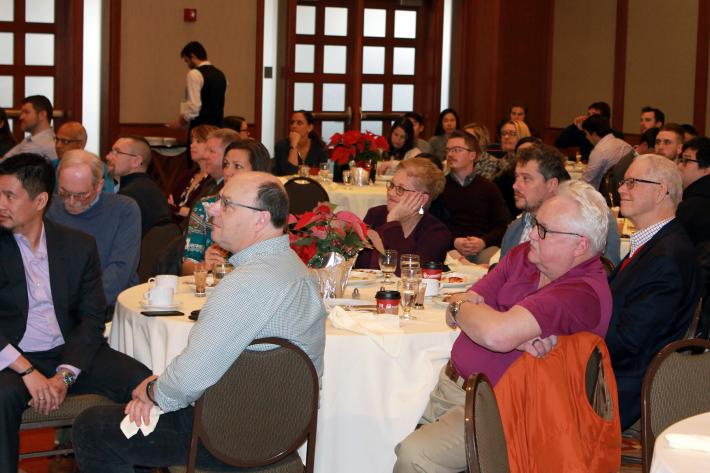 Alumnus Adam Hueve said Walton had a tremendous impact on his career in RF engineering.

“At the time I really didn’t have any clear career direction,” he said. “(He) really showed me a new field that I didn’t know anything about.”

Today, Hueve is an RF engineer at Wright-Patterson Air Force Base, still using many of the skills Walton taught him.

Walton is a distinguished Fellow of IEEE, Fellow of Antenna Measurement Techniques Association, and received AMTA’s Distinguished Achievement Award. He is also respected for his mentorship of many graduate and undergraduate students, as well as junior researchers.

Students, faculty and staff at ESL were also highlighted for their achievements in 2018 through the following honors:

Above and Beyond Staff Award:

Jennifer McCord, Human Resources Associate at ESL, whose efficiency, reliability and positive interactions with faculty and staff were spotlighted this year.

Above and Beyond Student Award:

ESL Graduate Research Associate Matthew Buchanan was selected for his efforts and accomplishments in remote sensing investigations and international conference participation throughout 2018. Faculty pointed out his ability to foster a community at ESL, as well as his sense of humor as well.

Above and Beyond Researcher Award:

Alexandra Bringer was selected for her excellent service to the ESL community and contributions to the Soil Moisture Active Passive (SMAP) program.

The ESL awards committee this year was made up of Research Scientist Chris Ball, Nima Ghalichechian, Teh-Hong Lee and Christopher Neese.