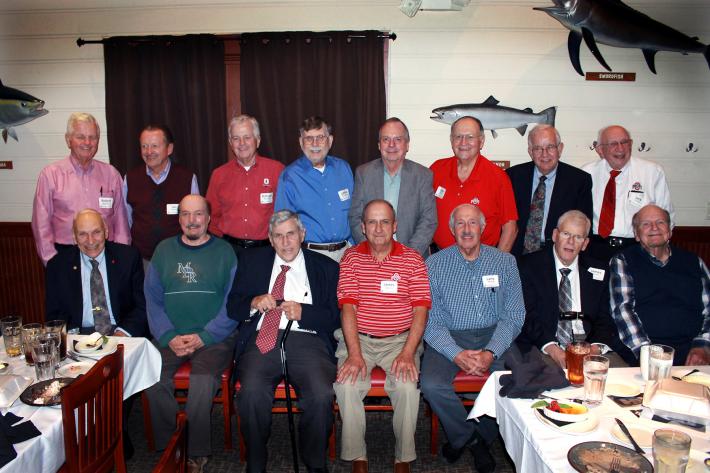 From wartime defense systems, to pioneering computer and radar development, every table at the annual Department of Electrical and Computer Engineering alumni dinner holds a depth of stories.

Fortunately, that's what the night is all about – telling stories, a shared history.

Originally organized as an evening to celebrate 50-year alumni of the Ohio State ECE/EE Alumni Society program, the dinner on Oct. 5 this year expanded to include graduates anywhere from 1968 to 1958. They represent an extended family of Buckeyes scattered around the world.

Ohio State ECE/EE Alumni Society member Mark Morscher ('89) said the point of the dinner was simple at first, to keep ECE alumni updated and engaged in their alma mater.

More than that, he said, seeing the labs and facilities gives them a chance to talk with current students about research and simply reminisce. The tours that day included Dreese and Caldwell labs. 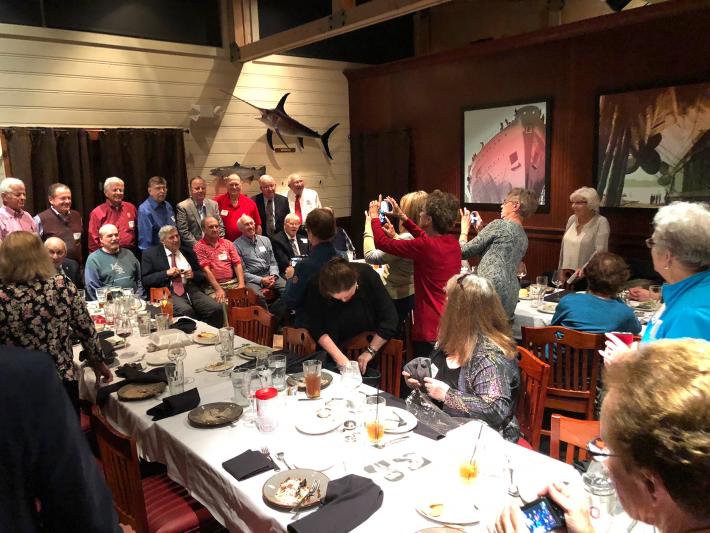 Alumnus Gene Rhodes ('63) said seeing all these places after so many years really struck a chord.

"One thing that hit me today, when we started out this meeting, I couldn't remember the names of any of my professors," he said.

Simply coming back to his old stomping grounds in Caldwell brought back unexpected memories.

"I don't know where it came from. I don't know why all of a sudden I started thinking of all these guys, but they taught us well," Rhodes said. "These people were really excellent professors. Great teachers. They cared about you. Isn't that amazing? Out of the blue. These things came into my head."

Alumnus James Cook ('65, '67, '70) said he feels fortunate having gone to Ohio State. His father-in-law once asked him which courses were the most important to his career. He said all of them.

“It was confidence. I got confident I could solve any problem if I had enough time,” he said.

Cook and his wife Sharon were celebrating their 50th wedding anniversary at the dinner.

“That’s the most important thing that happened about me coming to Ohio State,” he said, pointing to her. “We met.”

Other alumni were celebrating birthdays and anniversaries that night. Together, the group spoke about fireballs in the labs; past mistakes and success in research, and lifelong friendships made.

“My seat was often just a folding camp stool, right between the two pilots. There were occasional thrilling rides. Probably the most fun job I ever had,” he said. “If something went wrong, the pilot would turn to me and say, ‘What do you think of that?’ and he expected an intelligent answer. Occasionally, I was able to provide one."

“It’s more fun than you can imagine,” he said.

Alumnus Larry Rennie ('65) was on the soccer team at Ohio State back in the 1960s. He said not many people knew what the sport was at the time. So, his team would practice on the fields near the football stadium the day of games. People on their way to the stadium would see this game of soccer and wonder what the heck it was they were playing. 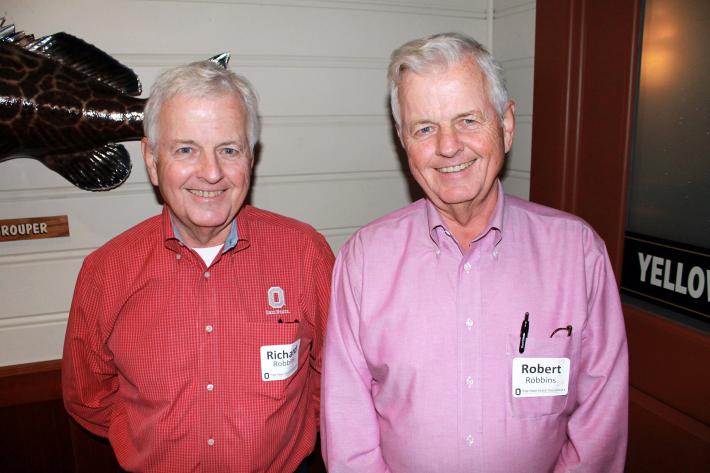 Richard, of Powell, Ohio, is retired from IBM and has two grown daughters – both Buckeyes. His secret to keeping up the tradition?

“When they graduated from high school, I told them they could go anywhere they want for college, but I am only going to pay tuition for Ohio State,” he laughed.

Just in case there were any questions, Robert joked, he is indeed related to his twin brother. After a career in government engineering, he started a small company in the late 1970s making test equipment for telephone companies. He worked there happily for over 30 years and retired in 2008.

ECE Chair and Professor Hesham El Gamal said the simple fact the 50-year alumni dinner keeps gaining attendance is because the department must be doing something right.

“You have good memories. You connect with it. My job, and the professors and everybody here, is to help keep the same spirit. To help create the same memories for the students,” he said. “I am grateful that you are here.”

El Gamal remarked how the alumni may have noticed on the tours that Caldwell looks exactly the same as when they graduated 50 years ago.

“We kept it that way just for you,” he said to laughter.