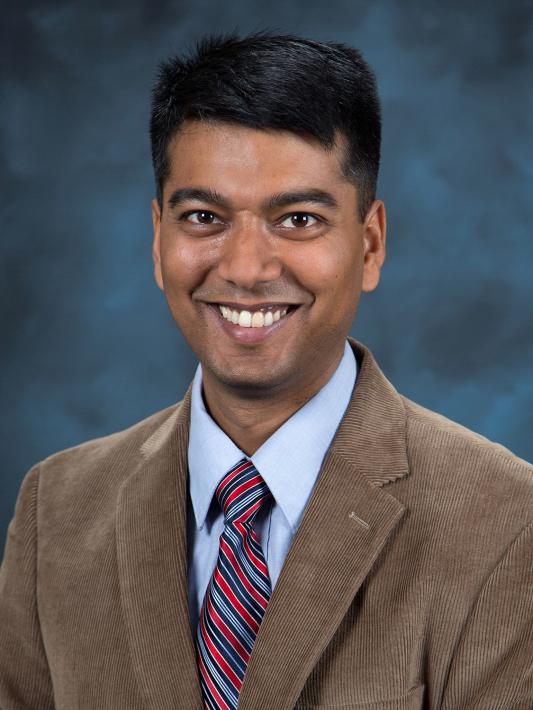 Conducting scientific research is often an art akin to juggling.

Abhishek Gupta, assistant professor of Electrical and Computer Engineering at The Ohio State University knows this well. He is simultaneously working on four research topics with his Ph.D. students, ranging from cyber-security and renewable electrical energy, to enhancing fuel efficiency for autonomous cars, and designing a transportation program.

Gupta joined the Ohio State faculty in the summer of 2015, which means each layer of his research is relatively new.

Before applying for the job, Gupta visited Ohio State for a game theory workshop. It made an impact.

“I was really impressed by the faculty and the culture at Ohio State, so that was good and made the first impression,” he said. “And then when I came here for the job interview, I heard about the Center for Automotive Research and the colleagues in controls who are really good in their respected fields.”

Even though Gupta’s Ph.D. is in Aerospace Engineering, he was more than qualified for the position since his theoretical research crossed over into ECE.

Focusing mostly on game theory, which deals in optimizing and satisfying both sides of a conflict; and security of control systems, which deals with understanding and preventing attacks, his four research projects deal less with a theoretical approach and require more application. Still, Gupta said they all fall into his research interest.

“This is about understanding the implications of an attack on control systems,” Gupta said.

With funding through the National Science Foundation (NSF), the concept of this research is understanding the trade-offs required to make a safe device.

Gupta gives an example of security on an autonomous car becoming breached since the machine operates through wireless signals.

“(In) another NSF project, we are designing electricity markets for renewable energy,” Gupta said.

He said renewable energy is very different because humans cannot physically control the supply, they can only oversee the demand once collected.

“The issue is, how do we adapt our demand to this new situation where the electricity that is being produced is completely random, and it cannot be controlled, like in the case of a generator?” he said.

Gupta said cars requiring an electrical charge-up can use renewable energy through a stored device or directly from the natural source, like solar-powered charging.

In the future, he said, autonomous cars will collect information from data sources, like traffic lights. From there, the vehicle learns when the light will change, what the road conditions are and even traffic patterns.

“The autonomous car can take in all that information and can change the speed profile in a fashion that is sensitive to fuel production, in a sense that you want to minimize the least amount of fuel for driving.”

The group recently made a simulator to collect findings and plans on testing their work within the next few months at the Center for Automotive Research.

This research looks to help civilians utilize all methods of transportation through a subscription service. Patrons could call for a cab that drops them off at a bus station; the bus then takes them to their destination where another taxi would be waiting if necessary. All this transportation would be included in one service.

Similar companies are already in use in Europe but implanting the idea into Columbus, and ultimately America is a different story.

“This is using all sorts of modes of transportation, public and private combined, and across states and geographies,” Gupta said. “Electricity is a service, water is a service, Internet has become a new utility and so transportation is the next on the horizon.”

Apart from his research endeavors, Gupta said he enjoys preparing future engineers in the undergraduate courses he teaches.

“I think a lot of the [students] are going to go out and create the next generation of technologies,” he said. “And certainly, helping them do that gives me a lot of happiness.”