“I am very excited about this award, particularly because it comes from URSI’s Commission K on ‘Electromagnetics in Biology and Medicine,’ an interdisciplinary area that my group is extensively working on,” Kiourti said.

The Young Scientist Awards recognize an international group of individuals making innovative contributions and discoveries in multidiscipline research related to electromagnetic fields and waves. The award supports travel grants and gathers together some of the most promising scientists between the ages of 25 to 35.

Within the International Council for Science (ICSU), made up of 26 international singular-discipline scientific unions, URSI is one of the very few multidisciplinary unions. Formed in 1919, it was also one of the first four original scientific unions as part of the International Research Council, the predecessor of ICSU. It is the largest within ICSU and URSI is frequently held up as an example to the other unions in this regard. 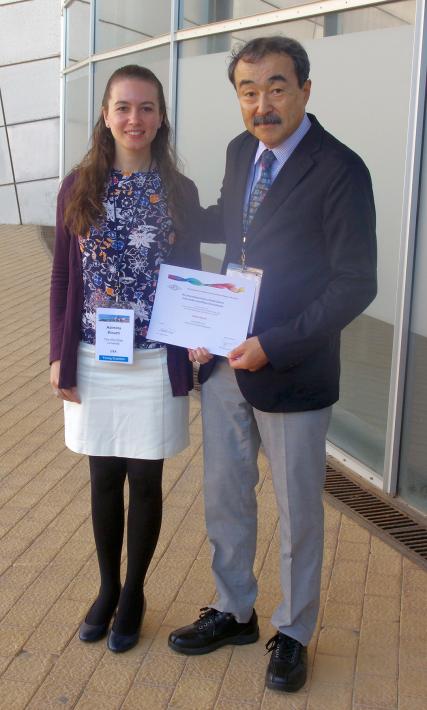 Kiourti leads the Wearable Implantable Technologies group (WIT) at Ohio State’s ElectroScience Lab. WIT conducts inter-disciplinary research at the intersection of electromagnetics, antennas, sensors and medicine. The work explores cutting-edge solutions for ubiquitous wearables and wireless implants to monitor a number of bodily functions and vitals. Among some of its research projects, are flexible E-textile electronics, batteryless and wireless brain implants, bio-magnetic detection of injuries and more.

Active collaborations at WIT are in place with the Ohio State departments of Surgery, Chemistry, Neurological Surgery, Mechanical and Aerospace Engineering, and Sports Medicine, among others.

Kiourti said traveling to Spain for the URSI awards event was invaluable.

“The conference in Gran Canaria attracted over 500 participants with greatly diverse participation from across the world and across all 10 URSI commissions,” Kiourti said. “Catching up with the latest advancements in URSI was certainly rewarding, as was the one-day school for Young Scientists that was specifically organized for the awardees.”

Kiourti joined Ohio State as an ECE Assistant Professor in Fall 2016. From 2013 to 2016 she served as a Post-Doctoral Researcher and then a Senior Research Associate at ESL. Prior to that, she received her Ph.D. in Electrical and Computer Engineering from the National Technical University of Athens, Greece (2013) and her M.Sc. degree from University College London, UK (2009). Her research interests include wearable and implantable sensors, antennas and electromagnetics for body area applications, and flexible textile-based electronics.