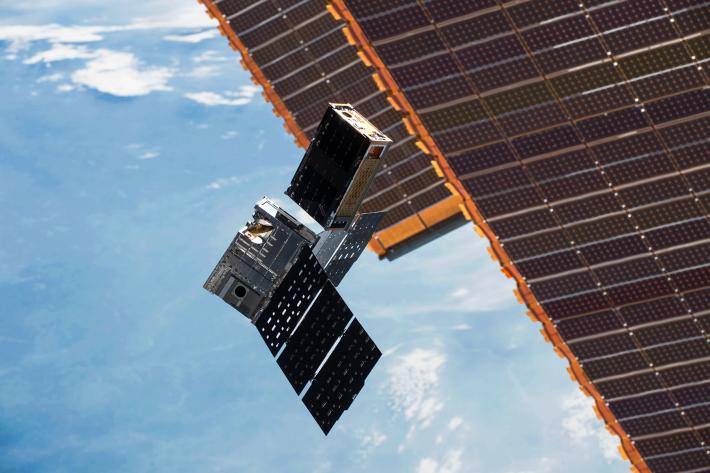 Its name may playfully give homage to a 1980s video arcade game, but the technology on board The Ohio State University’s first satellite -- the CubeRRT -- could be vital for Earth science missions into the future. It's scheduled for launch on May 20. (Update: It is rescheduled for May 21 at 4:39 a.m. because of inclement weather. Update: the launch was successful.)

The Ohio State team named the CubeRRT satellite after “Q*bert,” one of the most popular video arcade games of the 1980s.

The technology on board is designed to solve a major problem for researchers by breaking through noisy radio transmissions that can interfere with efforts to detect from space what's happening on Earth.

Meanwhile, humans are busy making a racket on Earth.

As the need for wireless services worldwide continues to increase, Johnson said, the growth of manmade radio transmissions is making it increasingly difficult to detect Earth’s natural microwave radiation. This influx is called radio frequency interference, or RFI. 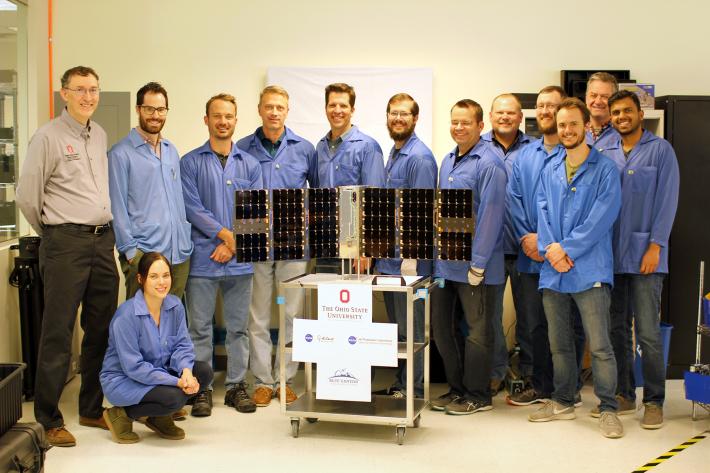 Watch a short video of the CubeRRT team explaining their work.

“The problem is only getting worse over time,” Johnson said. “The spectrum is getting more and more crowded, due to the continued rapid growth in demand for wireless services.”

“(Those radiometers) suffer very much from RFI and in many cases they can’t correct for it very well. They can get swamped by the manmade transmissions,” he said. “CubeRRT is a microwave radiometer that has a greatly improved processor to get rid of the RFI. The goal is to demonstrate this processor so future satellites can use it. The success of CubeRRT in space will demonstrate a new processing technology that will be very valuable.”

Soon, Johnson said, every Earth observing radiometer may require special processors to separate the RFI signals from the environmental data scientists need. His team specializes in such processors.

CubeRRT is scheduled for launch out of NASA’s Wallops Flight Facility in Wallops Island, Virginia, on (updated) Monday, May 21 at 4:39 a.m. It is integrated into a CubeSat deployer, the mechanical assembly sent to the International Space Station on a resupply mission, which will ultimately set the satellite into orbit this summer. 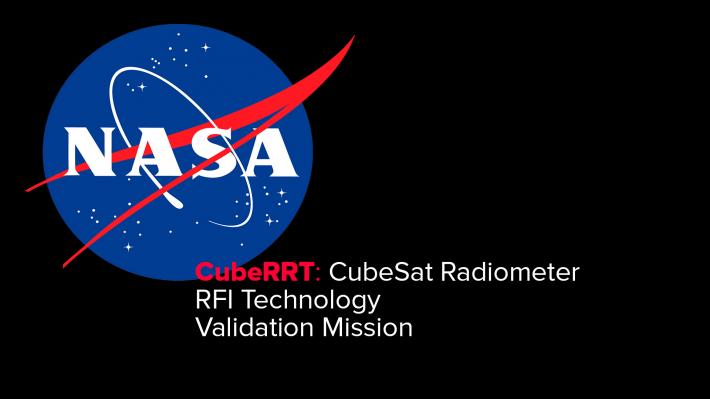 Watch a short video from NASA, which explains how CubeRRT works.
Read previous coverage of CubeRRT, “Navigating the Noise.”

One Earth-observing radiometer currently in orbit on NASA’s Soil Moisture Active Passive (SMAP) satellite serves as an example of how an RFI processor can provide better performance. 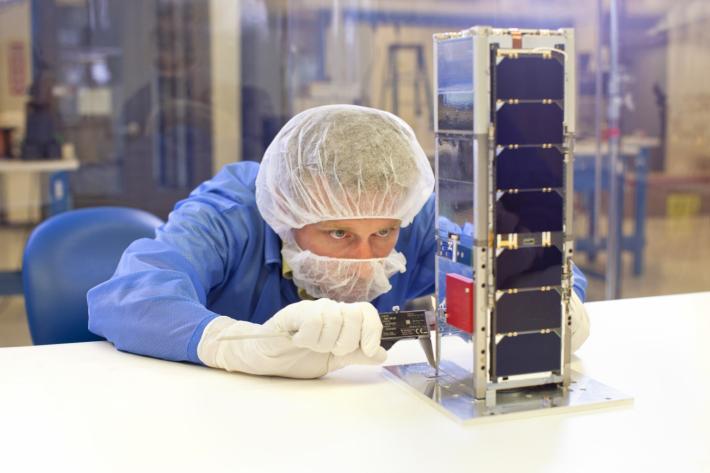 Days before Hurricane Matthew struck in 2016, Ohio State researchers used satellite maps of soil moisture to help forecast where power would go out along the East Coast.

Steven Quiring, professor of atmospheric sciences in the Department of Geography at Ohio State, said their results were 91 percent accurate – predicting 4.5 million people would be without power in Georgia, North Carolina, South Carolina and Virginia.

Quiring said their work was possible because of data from the SMAP satellite mission and its radiometer RFI processing technology. He was able to cross reference SMAP data with population density, land use, average wind speed and the duration and intensity of storms to make their forecast model.

“Many of our team members worked together on the RFI processor used in the SMAP mission,”  Johnson said, “The CubeRRT RFI processor greatly expands capabilities and enables operations in higher frequency bands than were used in SMAP.”

Ohio State ECE research associate engineer Christa McKelvey said the CubeRRT radiometer operates with a bandwidth 50 times greater than that of SMAP. Its processor is able to remove RFI for signals at a 1 gigagertz bandwidth, well above the possibilities within the 20 megahertz used in the SMAP processor.

Research Scientist Chris Ball, also at Ohio State ECE, said CubeRRT is expected to enter orbit this summer and remain active for approximately one year, providing valuable data during its lifetime to demonstrate the validity of their technology. Deployed from the International Space Station at 400 kilometers above Earth, the satellite will eventually burn up as the orbit diminishes during reentry.

A test mission on a smaller scale like this is a good idea, Ball said.

“Satellites are expensive,” he said, “and it is important to ensure new technologies have been validated in space before their large scale deployment.”

Ball also described how CubeRRT is able to collect and process data onboard the satellite – as opposed to sending the information down to the ground for scientists to decipher, the method used for processing SMAP. 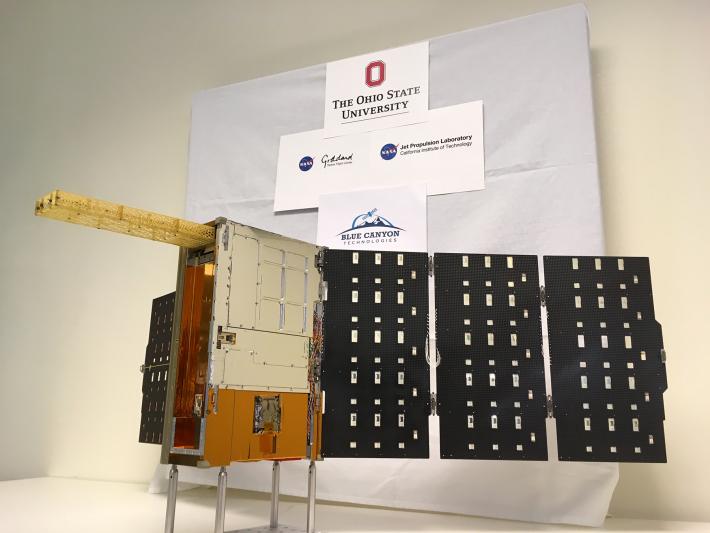 The CubeRRT project is funded through NASA’s Earth Science Technology Office (ESTO). Space access is provided by NASA’s CubeSat Launch initiative, which helps make satellite research more accessible to scientists by providing lower-cost pathways to space. CubeRRT’s RFI processor was installed on a CubeSat, which is approximately the size of a shoebox.

For the Ohio State team, being able to see their scientific goals achieved is a professional milestone.

“This is my first space-focused project,” Ball said.

McKelvey performed previous satellite development at Northrop Grumman, but never got the chance to see it function in orbit.

“Large satellite projects require a much longer process, at least 10 years, and I left the company before I was able to see my project launch,” she said.

In preparation for the CubeSat launch, NASA is planning to provide further coverage, as well as live social media coverage and interviews with the Ohio State team.

Subject to change in the event of inclement weather: Live launch coverage will begin at 4:30 a.m. Sunday May 20 on NASA Television and the agency’s website.

Joel Johnson will participate in a prelaunch briefing at 1 p.m. Saturday May 19 which can be viewed on NASA Television and the agency’s website.

Department of Electrical and Computer Engineering at Ohio State: