Two faces in The Ohio State University's Department of Electrical and Computer Engineering (ECE) were spotlighted for their "Above and Beyond" work efforts in 2018.

(ESAC) awarded Mark Andrews, a research associate engineer at the ElectroScience Laboratory, the "Exemplary Support or Advancement of Research" Above and Beyond Award during its annual Staff Appreciation Luncheon on April 26 for his commitment to radar and radiometry research.

“Mark supports large experiments, lasting several weeks, where he must travel and manage research efforts on-site. Most recently, he spent several weeks in desolate areas of northern Canada and Greenland," a fellow colleague wrote in his nomination letter. "This required personal commitment, and he was solely in charge of making these experiments successful, which shows both professionalism and leadership. In preparation for these experiments, Mark dedicated himself and his time to making sure everything was read, and he worked above and beyond normal job expectation to make this a success.”

Andrews received his B.S. in ECE from Ohio State in 2008. He obtained his M.S in Electrical Engineering from University of Southern California while working as a Payload Systems Engineer for Boeing Satellite Development Center in El Segundo, CA. In August 2013, he returned to Columbus, OH as a Radar Systems Engineer with STAR Dynamics in Hilliard. Beginning March 2014, he came to Ohio State's ElectroScience Laboratory focusing on radar and radiometry research while pursuing his Ph.D. 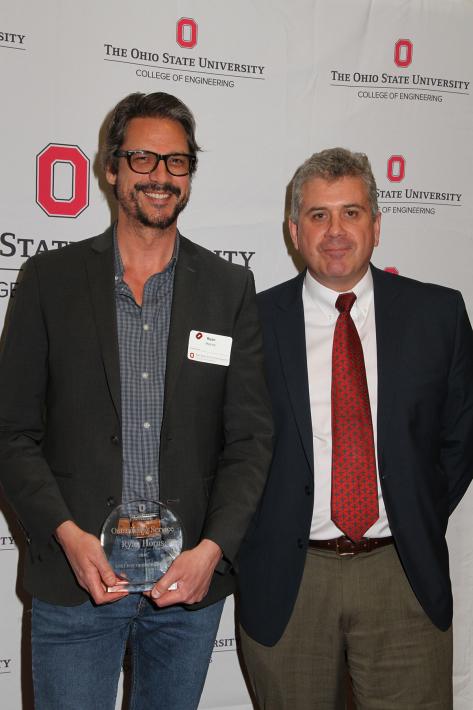 ECE Communications Specialist Ryan Horns was also recognized by the College of Engineering and ESAC for his effort to help shine a spotlight on students and faculty research achievements, while spreading engineering education and knowledge to the public at large. He won the 2018 Outstanding Service “Above and Beyond Award.”

In charge of the flow of research news, award coverage, as well as faculty and student spotlights at ECE, Horns helps his department and the college explain innovative work to the greater Ohio State community, and beyond. His work is produced through articles, videos, publications, photography and visual design. Additionally, Horns holds a dual role as the communications specialist for the Institute for Materials Research at Ohio State.

“I have worked in the Department of Electrical and Computer Engineering for over 20 years and have seen my share of staff come and go,” one colleague wrote of Horns in an award recommendation letter. “With Ryan’s contributions, he is elevating the College of Engineering as a whole by making the department more accessible and interesting than ever before to students, the community, and alums and colleagues near and far.”

Horns is a seasoned storyteller with accolades that include Ohio Associated Press awards for investigative reporting, business and column writing, as well as best breaking news photography, and community service. He joined ECE in 2014 after spending more than 16 years as a journalist in Ohio. In 2013, Horns complemented his bachelor’s degree in English, earned at Ohio State in 2000, with an M.A. in Mass Communications and Public Relations from Kent State University.

With the award, Horns receives praise for not only his above-and-beyond effort producing engaging stories for the department and its allied centers, but for the strategic approach he takes disseminating those stories through various outlets.

“The difference in communication formats coming out of the department has been startling,” an alumnus of the College of Engineering wrote for Horns’ letter of recognition. “Not only is it leveraging every communication means possible and establishing the weekly newsletters, his use of video interviews/profiles, and how fine they are produced, adds an excellent touch. It is so refreshing to be able to collaborate with someone like Ryan when figuring out the best approaches to reach alumni.”

Freudenberg was not surprised Horns was recognized. She has worked closely with him for a little more than a year now, learning and watching his excitement to continually elevate his department, noting his unremitting work ethic.

“Ryan has a wonderful skill of taking very complex topics and making them understandable to any reader, whether they’re a first-year in ECE or a professor,” she said.