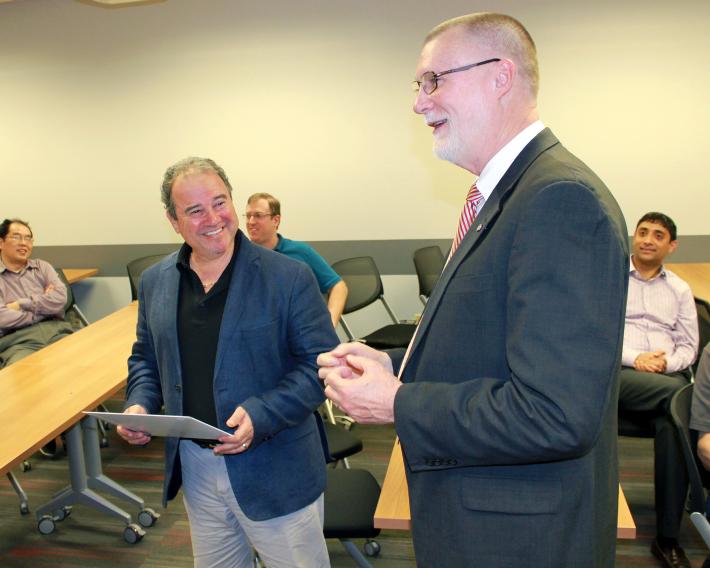 Steve Ringel is rarely at a loss for words.

An Electrical and Computer Engineering (ECE) faculty member for the past 27 years, Ringel found himself uncharacteristically taken aback, while surrounded by his colleagues and family in a Dreese Laboratories lecture room Monday morning. He was named a 2018 Distinguished University Professor in recognition of his exceptional record in teaching, research, and scholarly work at The Ohio State University.

(Watch a short video of the award presentation in Dreese)

Ringel serves as ECE’s Neal A. Smith Professor, Associate Vice President for Research in the Office of Research, and is the Executive Director of the Institute for Materials Research (IMR). The Office of Academic Affairs announced the award Monday during a surprise presentation in Dreese Laboratories.

“It is a tremendous honor for the college to have the Distinguished University Professor award within the college and, again, joining a very small and elite group of faculty,” said David Williams, dean of the College of Engineering. “What you do for the college and the university is just extraordinary, and in the various leadership roles that you play in IMR and within the Discovery Themes, so it really has been — despite all I ever say about you — a tremendous pleasure to work with Steve and to build on the great things that he is doing. The college is truly proud.” 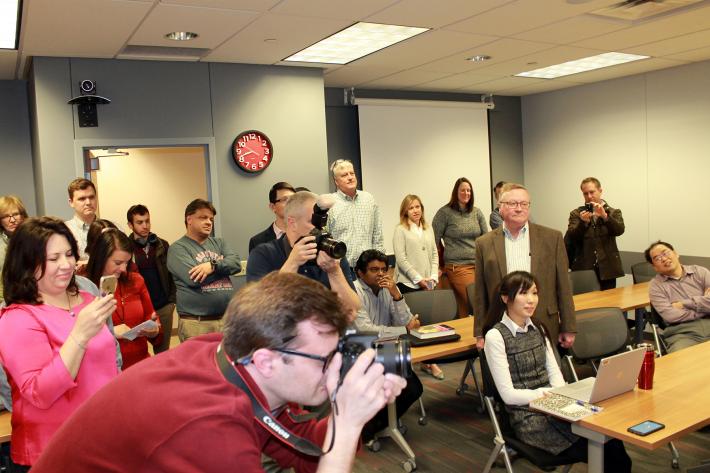 Joining Williams in the recognition — as well as the occasional, light-hearted ribbing — were several colleagues including Randy Moses, interim senior vice president for research and ECE professor; Joel Johnson, chair of the ECE department; and award presenter Bruce McPheron, who serves as the Ohio State executive vice president and provost.

“The Distinguished University Professor is the highest honor we award to faculty members, here,”  McPheron said. “It is a reflection of sustained and excellent contribution to teaching, to the scholarship of research and creative expression, to service of the university, and a very rigorous analysis of dossiers of accomplishment before these decisions are made.”

Ringel joins a small group of only 57 awardees in receiving the honor throughout Ohio State history. He was accompanied at the surprise announcement in Dreese Lab lecture room by colleagues, current and former undergraduate and postdoctoral students, his brother Matt, son Brett, and wife Geneva. 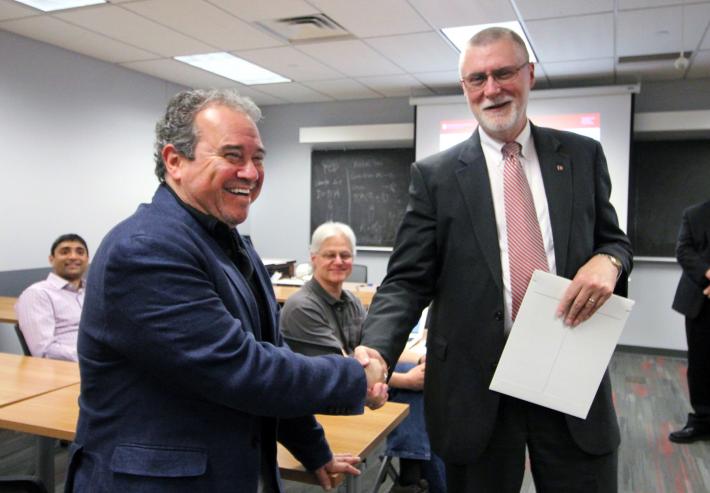 “In no way does this happen with one person,” Ringel said. “This is really quite a shared honor.”

Faculty nominations are typically submitted by department chairs to college deans. Ringel was nominated for this year’s honor by Johnson, ECE chair.

“I'm very happy to see Steve recognized by Ohio State as Distinguished University Professor,” Johnson said. “His contributions to the Department, College, and University have been outstanding, and his leadership of the Institute for Materials Research and the Material and Manufacturing for Sustainability Discovery Theme have had a transformative impact on materials research at Ohio State.”

Ringel is the author or co-author of more than 150 journal articles. He has participated in more than 260 conference proceedings and presentations, and was invited to speak at about 150 lectures and colloquia at international conferences and professional organization throughout North America, Europe and Asia. He served as an editor of three books, was invited to contribute to four book chapters, and has filed three patents, with two issued.

With the permanent award, Ringel earns a one-time, $30,000 grant to support his academic work as he maintains his regular program of teaching, scholarly work and research. Like previous awardees, he also automatically becomes a member of the President’s and Provost’s Advisory Committee.

Two Distinguished University Professor honorees were chosen this year. The other is chosen but not yet named. Honorees are recognized in the fall during an Ohio State Buckeyes football game, and by the Ohio State Board of Trustees.

Honoree Clark Larsen, professor of Anthropology, History, and Evolution, Ecology and Organismal Biology, is an authority on bioarchaeology, whose research focuses on the human condition through the last 10,000 years of human history, as viewed from perspectives of health, quality of life, adaptation and lifestyle.

Also honored that year, David Weinberg, Henry L. Cox Professor and Chair of the Department of Astronomy, is a theoretical astrophysicist studying galaxy formations and large-scale structure and observational probes of matter and energy content of the universe.

Ringel was previously named a 2015 Ohio State Distinguished Scholar. That award recognized his scholarly work in wide bandgap semiconductors and photovoltaics, as well as his leadership roles at IMR and as the Principal Investigator of the Materials and Manufacturing for Sustainability focus area of the Discovery Themes Initiative.