Posted: March 21, 2018
A wooden mechanical project, constructed of cranks, wires and a can of Sprite is set up on a table.

Such a jovial attitude is why the annual MakeOHI/O hackathon event is always interesting at The Ohio State University. Success or failure doesn’t matter, it’s all about the passion for creation. With faculty mentors on hand throughout, such as electrical and computer engineering (ECE) Professor Steven Bibyk, students find an environment to both experiment and test their skills.

(Watch a short video recap of the event)

Over March 3 and 4 at Knowlton Hall, students from many scientific disciplines brought their tech ideas to life in one day. Not only inventing new technologies, but also engineering, building, and marketing them over 24 sleepless hours. Ohio State faculty, alumni and volunteers picked the winners. 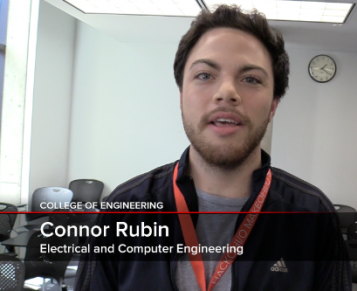 ECE student Connor Rubin knows now how much work it takes to plan the event – let alone participate in it. As the president of the Electronics Club at Ohio State, he took on the lead organizing role this year.

The MakeOHI/O event focuses more on hardware development, he said, so it draws in a lot of ECE, as well as Computer Science and Engineering (CSE) participants – although any student is welcome.

“They come together to build robots, light displays and things like that,” Rubin said.

“The project was to adapt a dog treat shooter for a girl with cerebral palsy. It had to connect to her wheelchair, have variable distances, and she had to be able to operate it. They had to modify that for her needs,” Rubin said. 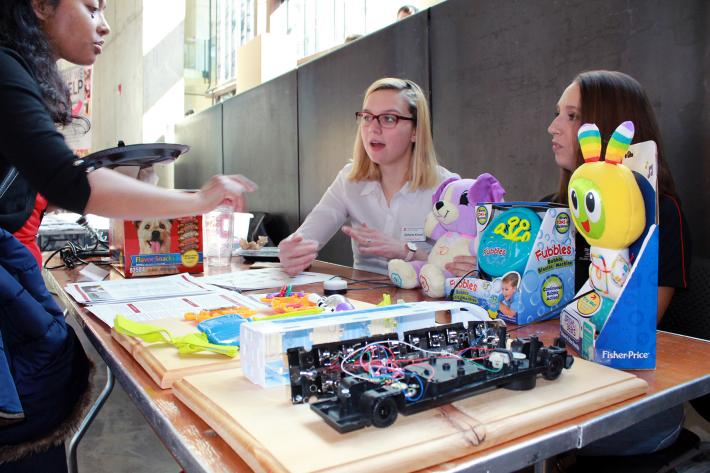 The Center for Design and Manufacturing Excellence (CDME) at Ohio State presented the second challenge to participants, a $3,000 prize for the most entrepreneurial project.

“That’s $3,000 to continue developing the idea, and to use their maker space,” he said. “The idea is to pitch how you would sell it; how you would market it. It’s a 24-hour event, so you can only really prototype it.”

“So basically, with RFID tags, you scan it and it notifies who is home or not home,” he said. “And one of our CSE kids developed a web app. Maybe you want to make sure your kid got off the bus safely and they are checked in.”

Ideally, if a team wins, members can use the CDME funding to continue prototyping their device.

Another team based a project off the Lunar Landing video game, utilizing a rotating mechanic landing pad. 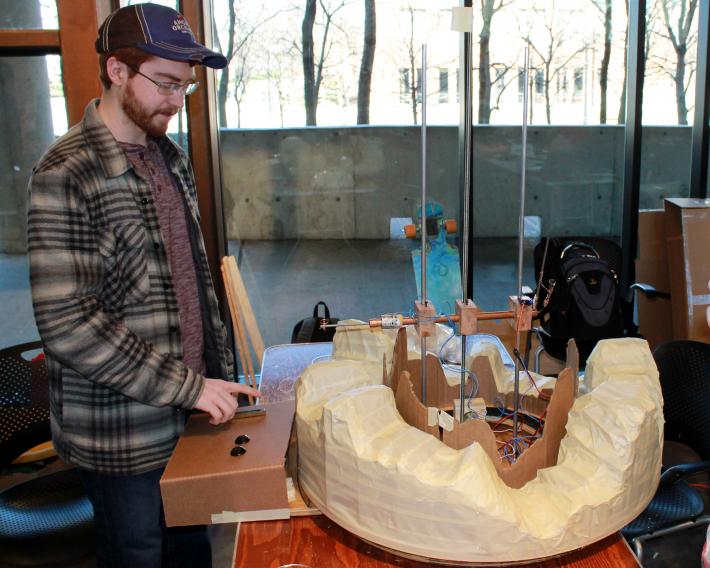 “The rack goes up and down. That’s your vertical access,” team member Matt Charleston said. “And then your spaceship pivots to the left and to the right. On your control panel over there, you have a throttle, and your goal is to try and land it on a certain spot.”

Another student created a laser projector in a shoebox, projecting dynamic images capable of being manipulated in size and shape.

“Just a huge range of projects,” Rubin said. “I was really impressed, actually.”

CSE student Anjali Kapoor was in charge of sponsorship this year for MakeOHI/O. She got involved after participating in 2017.

“I was really kind of new to computer science, and applying those skills outside of the classroom. MakeOHI/O gave me a space to grow, both technically and in terms of working on a team,” she said. “After doing that, it really made me want to get involved in putting the event together.”

Working at the sponsorship level, Kapoor said, was a good chance to connect with industry leaders and learn what makes them tick.

“It was a really cool experience. It was a really great chance getting to communicate with different sponsors and see what they were interested in, and why they were passionate about events like this,” she said. 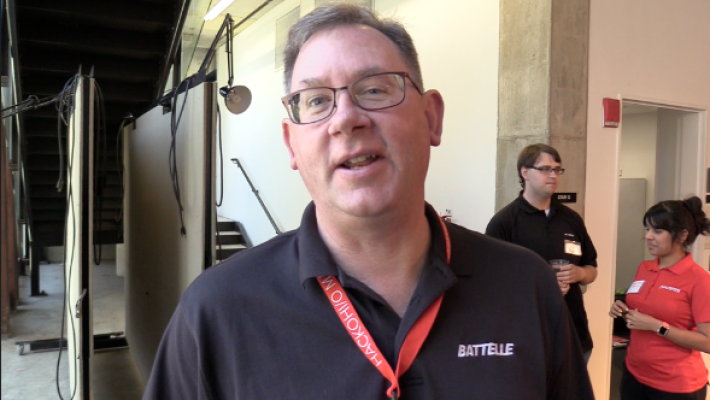 Tom Bergman, Program Manager at Battelle, volunteered as a judge this year.

“There is a group that are working as interns at Battelle that have a birdhouse that tweets when it detects a purple martin show up, which was pretty cool,” he said.

Bergman said the company gets involved with MakeOHI/O with the future in mind.

“We’re trying to support, recruit, identify and help with that next generation of students that can come to places like Battelle and make a difference in the world,” he said.

While primarily an event for the Electronics Club, Rubin said in future years MakeOHI/O will fall under Ohio State’s hackathon program, OHI/O, which hosts a growing number of events on campus to foster the tech culture at the university.

May We Help Challenge: