Posted: November 6, 2017
Growing up in Bradner, Ohio – a town of a little over 900 people – the prospect of a college education seemed like a distant dream for Ricky Taulker. He wasn’t born wealthy, no one in his immediate family attended college and only half of his senior class opted for higher education.

(Watch a video interview with Taulker)

“We are a very small sort of community. Our high school was in the middle of cornfields and a lot of the people around us come from really small towns,” Taulker said.

Taulker said his parents came from a working-class background. High school was the highest level of their education. What they may have lacked in college experience they made up for in encouragement.

“I think they saw an opportunity that they didn't get to have when they were children and they wanted me to take full advantage of it,” he said. “I can remember in sixth grade them talking about college and saying, ‘hey, you’re going to go.’”

His experiences in math and physics classes only fueled that desire.

“I remember in my physics classes and calculus classes, I always found crazy enjoyment out of doing the problems,” he said. “I remember a lot of my peers, they would get real frustrated at problems and I just kind of like sat there and I wouldn’t really get frustrated. I just want to figure it out. I wanted to understand. I wanted to make sure that I knew it completely, to the point where I could go teach it to people.”

Taulker is now a third-year student majoring in electrical and computer engineering at The Ohio State University. But the challenge Taulker and other first-generation college students face doesn’t end with acceptance to a university like Ohio State. Paying for the degree can present hurdles as well.

And work he did. Taulker said he applied for every scholarship he could find. He filled out applications, wrote essays and pitched himself in interviews.

“I found out more about myself in that time period than I think I did for a large part of my life,” he said. “The college scholarship application questions really dug deep into who I was, where I wanted to go and how I’ve gotten to where I am. And I think that was that was transformative in itself.”

Taulker remembered excitedly calling his family when he learned he had received a $6,000 scholarship. But he was concerned it wouldn’t be enough. 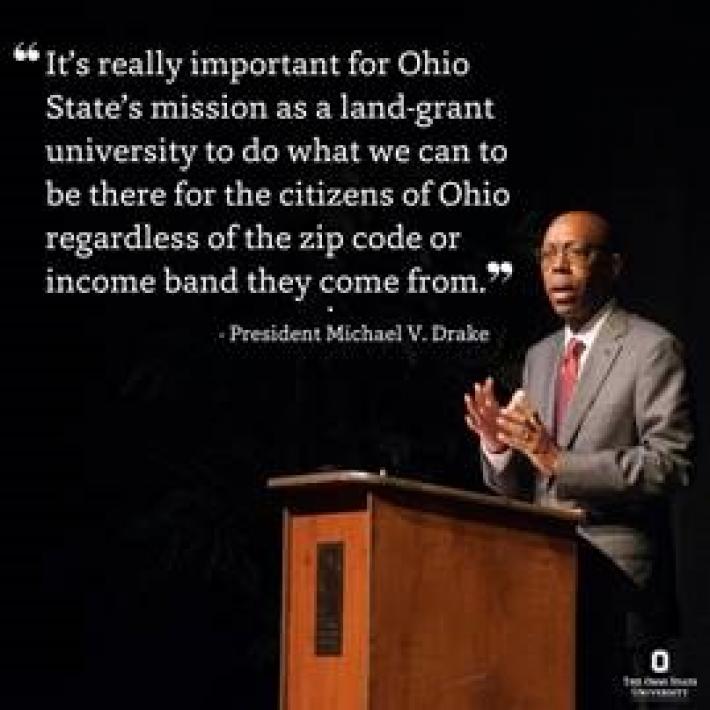 “And then I remember one day, I’d gotten home from school and I was always really adamant to check in the mail. I went and checked the mail and I’d gotten a letter,” he said. “It wasn’t the timeframe where we were expecting letters to tell us if we got into college or not. I opened it up and it said I was offered the Land Grant Opportunity Scholarship for full tuition.”

Taulker said the news was remarkable.

“I just remember this overwhelming sense of happiness. Oh my God. You know this is life-changing,” he said.

Taulker’s interests at Ohio State are focused on robotics and automation. He said he hopes to go into the automotive industry with the goal of not just building a better car, but changing lives.

“I’m really into creating an experience for people that can change their lives, that can affect their lives,” he said.

The Land Grant Scholarships are part of a core mission at Ohio State to open up access to college for students across the income spectrum.

“It’s really important for Ohio State’s mission as a land-grant university to do what we can to be there for the citizens of Ohio regardless of the zip code or income band they come from,” said President Michael V. Drake.

Ohio State continues to expand opportunities to make college more affordable. The university announced last month that all in-state students who qualify for  Pell Grants would receive financial aid that covers the full cost of tuition and fees.

The university also created the Ohio State Tuition Guarantee, which freezes tuition and fees for each incoming class of first-year students for four years. And the Land Grant Opportunity Scholarship program has been expanded to cover the full cost of attendance and apply to twice as many students.

At the national level, Ohio State is a founding member of the  American Talent Initiative, a first-of-its-kind partnership with Bloomberg Philanthropies, Ithaka S+R and the Aspen Institute to enroll an additional 50,000 low- and moderate-income students at top-performing colleges and universities over the next decade.

“We are a very competitive, internationally powerful university and we have an opportunity to do even more to particularly focus on and encourage middle- and lower-income students to seek and achieve an education at The Ohio State University, and the American Talent Initiative helps us to do that and again makes us true to our founding mission,” Drake said.