Their collective work was recently published in the Transportation Research Board Journal.

Coifman, a professor with the Department of Electrical and Computer Engineering, explained their collective work attaching sensors to municipal vehicles.

“The ultimate motivation for this work is that you have many applications where you need to know how much traffic is using this roadway or that roadway,” Coifman said, “but all too often that goes completely unmeasured because it is cost prohibitive to monitor all of the streets.”

He said collecting traffic data is essential for long-term applications like transportation planning where traffic demands are predicted in order to determine where to build new roads, to short-term needs like well-timed traffic lights to reduce delays. 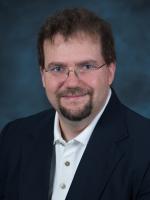 Benjamin CoifmanIt all started with their collective work in rocket science. Coifman and his colleagues have been conducting traffic research together for over a decade. They started out by counting cars from satellite imagery as a means to collect traffic data on unmonitored roads.

In their recent research, the team developed an innovative way to collect data on a more convenient and quantifiable level; easily analyzed for future roadway decisions. Municipal vehicles are alrady traveling the network. Adding sensors to these vehicles to passively collect traffic data, they find a low cost solution to extend traffic counting to previously unmonitored roads.

To prove the concept, the team attached several Light Detection and Ranging (LIDAR) remote sensors to a minivan, which represented a municipal vehicle, and drove around the Ohio State campus to collect traffic data.

“[The van] has all the sensors you would need for an autonomous vehicle but it’s got a human driver,” Coifman said. “Instead of using the sensors to detect potential threats and danger to the vehicle, we use it to passively monitor the traffic around the vehicle. So now anywhere the vehicle goes, you get a short-term count or observation of traffic at that instance”

Coifman understands that any single short-term observation is not representative, but by collecting data at different times throughout a year the statistics accumulate, revealing trends to analyze.

The research not only proved collecting more quantitative information is possible, but using municipal vehicles can easily tailor the collection process to unique traffic areas such as Ohio State.

“Most traffic studies assume that you’ll have a morning peak and then an evening peak, with everyone is at work in-between,” Coifman said. “But around The Ohio State University… sometimes you have two peaks per hour as people are going to and from classes.”

Coifman and his colleagues said collecting data on campus was like having a living lab.

“It’s a large enough system where you have the real problems you find in a large city, but it’s small enough to where you have fewer confounding issues,” he said.

The team of professors are now looking into the possibility of attaching smaller, more affordable sensors to actual municipal vehicles and expanding their research beyond the campus walls.

“The roadway and automobile system is now a mature system,” Coifman said. “The demand keeps growing but the capacity is not going to grow much… so we’re going to have to use the roadways we have more efficiently.”

And with efficiency comes safety. The data collected from municipal vehicles fitted with sensors will help officials determine where there is a need to improve safety.

“This is now providing more quantitative information for decision makers to decide when it is necessary to make investments,” Coifman said. “And that’s at all levels, from short-term traffic control to long-term city planning to infrastructure renewal. Everything needs data.”