Longya XuAn engineering professor from The Ohio State University was selected to become the first winner of the prestigious 2018 Nikola Tesla Award in the school's history.

The honor is presented annually by the Institute of Electrical and Electronics Engineers (IEEE).

Ohio State Department of Electrical and Computer Engineering (ECE) Professor Longya Xu is known for his “contributions to design and control of efficient electric machines for wind power generation and electrified vehicles.”

Xu’s specific research interests include power electronic converters and control of variable-speed drivers, just to name a few. He serves as Director for the Center for High Performance Power Electronics at Ohio State. 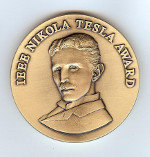 Named in honor of the late electrical engineering icon known for his development of the coil and the A/C induction motor, Nikola Tesla, the award was established in 1975 as a joint effort between the IEEE Power Engineering Society and the IEEE Board of Directors.

Xu received his PhD from the University of Wisconsin in 1990 and has taught at Ohio State ever since. Originally from China, however, he also consulted for many companies, such as Honeywell, Boeing, General Electric, and Raytheon Company.

“This honor is given to either an individual or a team of up to three researchers,” the Technical Field Awards Council reported. “Impact on technology, leadership, and inventive value are just some of the criteria nominees are judged on.’

The prize ultimately consists of a bronze medal, certificate and honorarium.

A full list of past recipients can be found HERE.