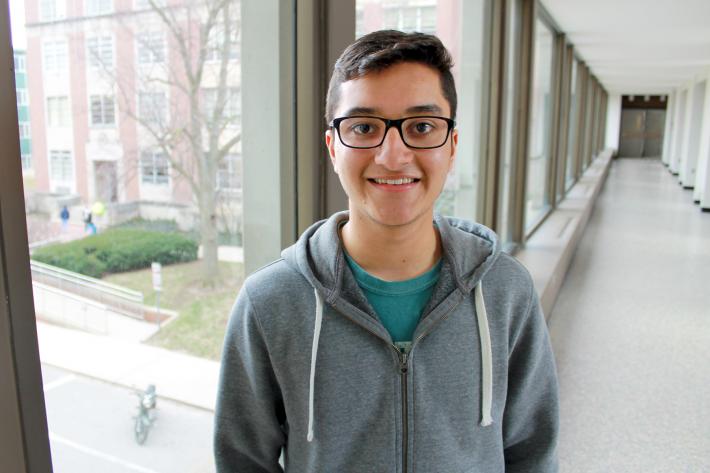 Anyone who has broken a bone knows how tracking the flexibility of joints helps to reveal healing progress.

Under the guidance of ECE Assistant Professor Asimina Kiourti at the ElectroScience Laboratory, Vilkhu designed a wearable electronic monitor that wirelessly tracks recovery periods in patients suffering from joint injuries, such as knees or elbows.

Current monitors on the market are bulky, and none are designed to slip over the injured area non-invasively, with a fabric sleeve instead of a brace.

“We can stitch them into the fabric for a truly flexible and non-intrusive experience. It puts numbers behind it and tracks the development,” Vilkhu said. “The end goal is to help monitor a patient’s elbow injury, and to speed up the recovery phase.”

While the design of the Elbow Flexion is one part of his work, he said, the bigger picture is exploring the overall potential of wearable flexible sensors woven into fabric. The team at Ohio State is making groundbreaking advancements not only in the refinement of these electronic textiles, but also in making such sensors run on advanced novel power generation methods.

The MTT-S scholarship includes $1,500 and a travel reimbursement to receive his award at the IMS 2017 conference, which takes place June 4-9 in Honolulu.

Vilkhu said the trip to Hawaii is just as exciting as the scholarship itself.

MTT-S has more than 10,500 members and 190 chapters worldwide, all focused on promoting the advancement of microwave theory and its applications, including RF, microwave, millimeter-wave, and terahertz technologies. Only 10 undergraduate students are selected to receive the scholarship each year.

Looking back, Vilkhu said he was always interested in the hidden components that make up modern technologies. However, his experience taking part in the FIRST Robotics program helped open his eyes. The program unites high schools with engineering industries to celebrate science and technology by inspiring the creativity of high school students before they reach college.

“That’s where I got into electrical engineering, specifically,” Vilkhu said. “There are so many cool types of engineering out there, but I really liked the idea of getting to work on making the brains inside the machines.”