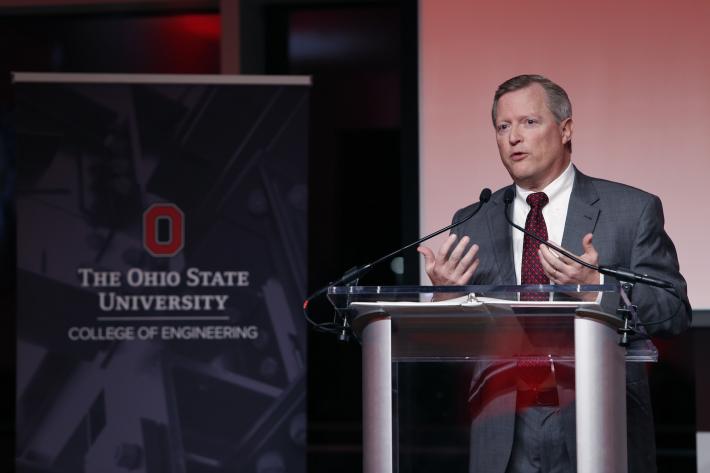 Electrical and Computer Engineering (ECE) alumnus Thomas Burns recently walked engineering students at The Ohio State University through his colorful career path, offering not only insight to the industry, but life in general.

The event was held as a colloquium for students Nov. 4 at Dreese Labs, which he called “My Career as an Electrical Engineer."

Burns recently won a College of Engineering Distinguished Alumni Award for being a dedicated mentor and graduate from Ohio State. He remains a formidable voice within the engineering industry.

After his undergraduate career at Ohio State ended, Burns became an Air Force Officer and went on to earn his MS and Ph.D. degrees in Electrical Engineering at the Air Force Institute of Technology at the Wright-Patterson Air Force Base in Dayton. He then moved on to become program manager of the Defense Advanced Research Projects Agency, or DARPA. After a stint in the entrepreneurial world, working for two separate companies, he found himself back at DARPA as the Director of the Strategic Technology Office.

Throughout Burns’ discussion with students, he passed along tips he learned along the way and highlighted information useful to students entering into the field. One prominent piece of advice for engineering graduates: specialize. Becoming an expert in a certain section of engineering is something they can always fall back on, he said. 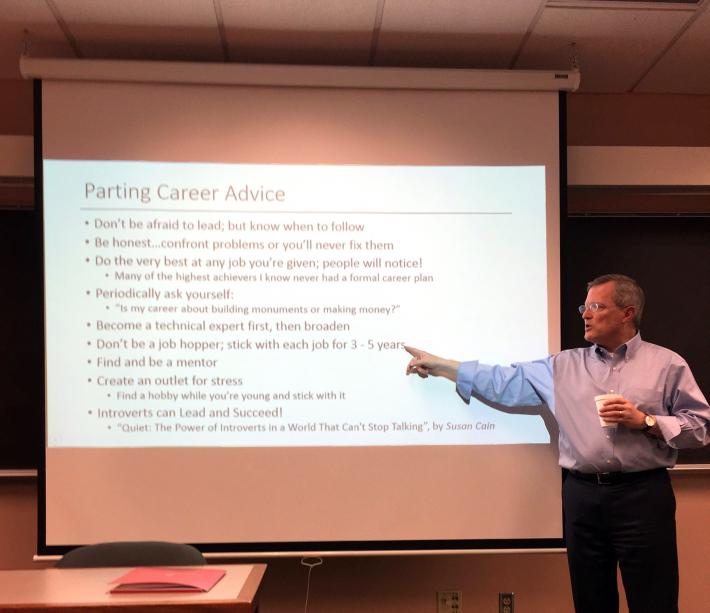 The power of effective writing and communication is another trait young engineers cannot afford to leave underdeveloped, he said, as they prepare for the industry. This advice lends itself especially well when managing a team. He said leaders can’t be afraid to take risks and they must be comfortable working as a team. Both traits become easier through the study of effective communication.

Sensing many students in the audience were deciding what to do post-undergrad, Burns suggested some career market paths he noticed firsthand are opening up in the future - artificial intelligence, autonomous systems, bioengineering, cybersecurity, and Low Earth Orbit (LEO) space systems.

As an employer, Burns also mentioned tips for students applying for jobs. Stability is key in the workforce, he said, and admitted to skipping over applications from candidates who jump around from job to job. While not encouraging students to stay at a job for their entire career, he recommends sticking around for at least three to five years and leaving behind a reputation for good work ethic.

Toward the end of the discussion, Burns readily admitted to being a natural introvert. He explained that some of the best leaders he knows are introverts who learned how to become effective leaders and organizers.

Burns closed the discussion after bestowing some advice about life outside of the engineering realm. He pushed students to find a hobby or stress outlet they enjoy, something to help carry them through the anxiety of finding a job and working in the industry.

He also reminded students to remain honest with themselves and to evaluate every now and then why they are engineers. Is it about “making monuments or making money?”

Burns smiled as he passed on his last piece of advice.

“Have a motto for life,” he said. “Mine is ‘Have fun. Solve hard problems. Change the world.’”