The award was presented during The Ohio State University’s Department of Social Change's second annual Civic Engagement Banquet held at the Ohio Union.

Greenbaum said it's both challenging and rewarding talking to students about engineering.

“Working with the students is such a great experience because they are unpredictable; I’ve worked with thousands of them and they still surprise me,” he said. “I owe everything to the people, particularly scientists and engineers, who took the time out of their lives to reach out to me when I was a kid and I want to pay it forward.”

To say Greenbaum is dedicated to teaching younger generations about the wonders of electrical engineering may be putting it mildly. He has served as K-12 Engineering Outreach assistant to director Betty Lise Anderson since 2011. Between them both, the program has reached more than 11,000 students and just recently earned the 2015 Ohio State University Outreach and Engagement Recognition Award, as well as the Ohio State Distinguished Community Engagement Award.

“He is the best person I have ever seen at explaining science concepts to even very young children,” Anderson said, in her nomination letter for Greenbaum. “He is the best at convincing frustrated or reticent kids to complete the project and show they can do it.”

Anderson said he has helped with over 140 outreach events for the Electrical Engineering Department alone. He also volunteers with Tech Corp, the Ohio House of Science, the Women in Engineering Program, and the Minority Engineering Program at Ohio State. Greenbaum also runs a summer STEM camp at the Plain City Library.

Anderson said he volunteers “basically any chance he gets.” 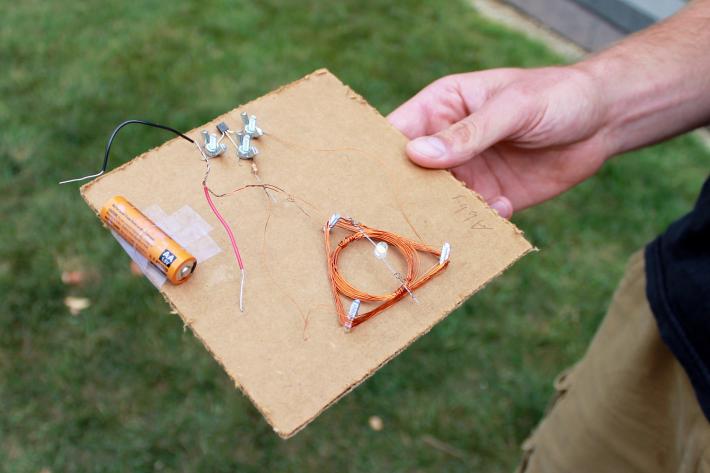 “In his spare time, he is constantly developing new STEM projects for kids and refining existing ones – the most recent is a wireless energy transfer project that makes an LED light up without ever touching the circuit with the battery,” she said.

Nominees for the Marian Wright Edelman Award “have placed value on education and promoted the advancement of and equal access to education.”

After studying around the world on the Merrill Scholarship and Lisle Fellowship, the award's namesake, Marian Wright Edelman, attended Yale and became the first African American woman admitted to the Mississippi Bar. Upon founding the Children's Defense Fund, her continued leadership and activism earned her the Albert Schweitzer Prize for Humanitarianism and 2000 Presidential Medal of Freedom.

Video of the K-12 Engineering Outreach team in action: