Straight from the labs of The Ohio State University Department of Electrical and Computer Engineering (ECE), a new motion-tracking device launching soon could make waves within the fields of medical sports therapy, sports training, military and even gaming.

With the slogan “Own the 3rd Dimension!” SolitonReach introduces an inexpensive, wireless, long battery life and lightweight pathway into the 3D mobile device realm. The product debuts at the Disrupt TechCrunch San Francisco tech showcase over Sept. 21-23. Click the link to watch a short video demonstration of the device: https://vimeo.com/132160696

Zhao and Ozyalcin both graduated with an MS degree this year, after being actively involved in Khan's research. They also gained real-world experience by interning at Texas Instruments and Microsoft, respectively.

Khan said he got to know both students well after previously serving as their undergraduate academic advisor. He has since watched them turn from students into partners as they collaborated in the lab for SolitonReach. 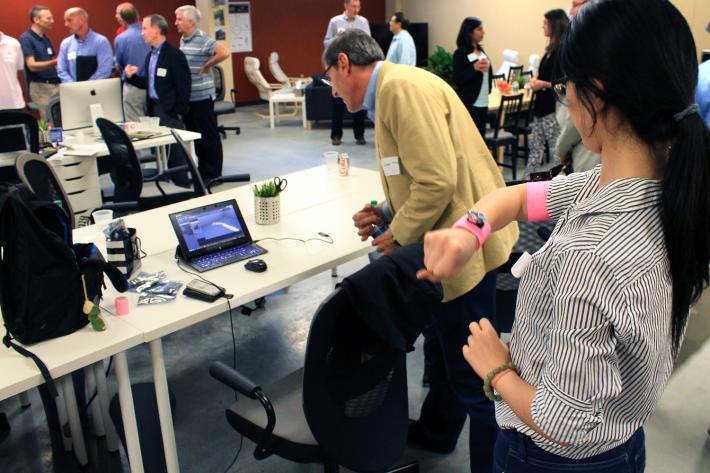 Sitting at a café in Columbus with Zhao one day, Khan said they were brainstorming about what to name their new device. They took a car ride for a change of scenery and passed by the Scioto River, where they noticed a distinct wave in the water.

With his background in theoretical physics, Khan said, the movement of the wave reminded him of the phenomena known as a “Soliton,” first discovered by the Scottish engineer John Scott Russell in the 1800s.

They knew they finally had the name.

“Each sensor reports the orientation of your limb,” she said. “One is mounted on the forearm and a second is mounted on biceps. Each of these is wirelessly transmitting to a tablet device.”

As Zhao moved her arm in demonstration, its computer-generated version similarly waved, picking up items on a virtual table on the screen.

While there are plenty of new human-computer interaction devices for console and PC applications, Khan said none have found their way into the mobile phone and tablet market. In addition, similar technology often requires the use of bulky suits filled with sensors, too expensive for the standard market.

SolitonReach stands out, Khan said, because it is small and lightweight, consisting of two wireless motion-capture sensors they built from the ground up. The sensors are each about the size of a quarter, with a weight similar to a quarter. They deliver up to 90Hz of sampling rate for a full-body unit and can run continuously for up to six hours. Cost is kept low by only requiring the need for two sensors, as well as the fact that all firmware and software were developed in-house by Zhao and Khan.

“We expect our customers to be professional and amateur mobile app developers,” Khan said. “The use of our system is not limited to 3D gaming, but developers interested in exploiting the third dimension for any app.”

He said SolitonReach has applications into home/architectural design, business apps, as well as a host of realms associated with sports and healthcare.

The ECE team now hopes the wireless, low power and inexpensive aspects of SolitonReach will stand out at TechCrunch Disrupt over the next few days.

IKOVE’s Will Zell said he sees the collaboration between Ohio State researchers and business minds as an important step in the field of regional startups.

“You have a university that is as powerful at developing technologies, and you have leadership that came into place at the TCO that ‘gets it’ and knows what it takes to commercialize technology, and you have a group now that comes from the business world,” he said. “Those three partner together. I believe it’s a formula that we will continue to see.”