Ohio State ECE and the New Horizons mission to Pluto 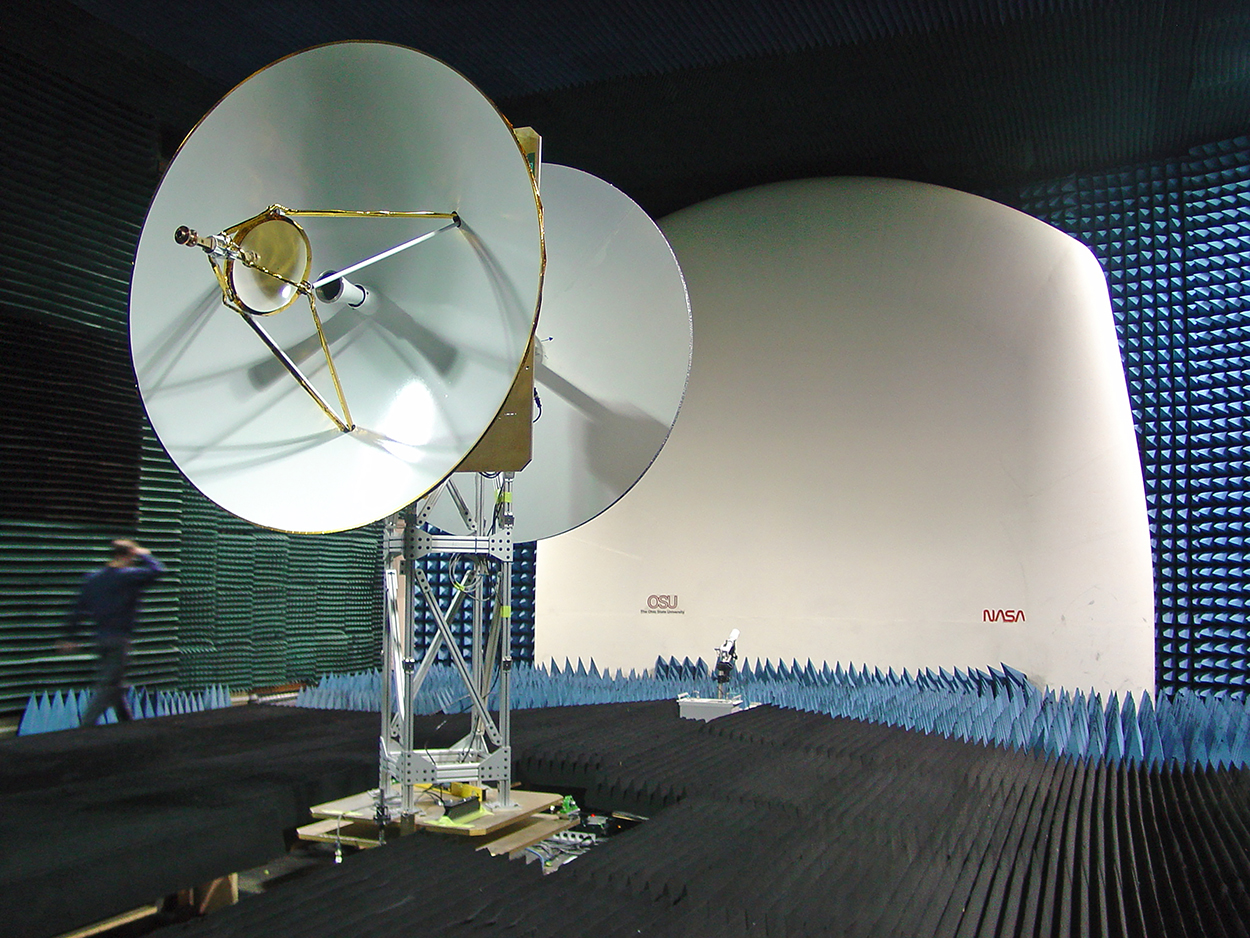 High gain antenna dish being tested in the anechoic chamber, 2006.Over the past nine years, NASA’s New Horizons space probe has been hurtling through space on its way to study Pluto in detail for the first time in human history. On July 14, it finally reaches its destination.

Jim MoncriefStanding in the darkened anechoic chamber at The Ohio State University’s ElectroScience Laboratory (ESL), the grin Jim Moncrief wears underneath his white moustache says it all.

Moncrief is senior electronics technician and anechoic chamber manager at ESL, a division of Ohio State’s Department of Electrical and Computer Engineering.

“I’ve been here 21 years,” Moncrief said “It was the neatest thing we ever worked on. After all these years, I can’t believe it is only days away.”

A little-known fact about New Horizons, Moncrief said, is the role Ohio State played in its success beginning in 2002. Over a decade ago, Moncrief and other engineers at the lab began assisting Johns Hopkins University/Applied Physics Laboratory (APL) engineer Ron Schulze, in the testing and calibration of his high gain dish antenna design for the New Horizons probe. It remains one of seven instruments currently collecting data from space.

Still employed with APL today, Schulze said the project remains a highlight of his career.

"The high gain antenna is the most prominent feature on the spacecraft," he said. "It is the last piece of hardware that the images and science from Pluto will touch before the data is received on Earth. It better work!"

Schulze said the project also gave him the unique opportunity to work alongside his mentors as a peer. From 1989 to 1991 Schulze earned his MS degree at Ohio State, studying under the academic guidance of former ESL director, Dr. Walter Dennis Burnside.

“I was introduced to the art of antenna measurements and design,” Schulze said.

After graduation, he became lead engineer at APL for the New Horizons antenna system in support of NASA’s mission to Pluto. The project pointed him right back to Ohio State.

The challenge, Schulze said, was the alignment of the antenna.

“At a Pluto-like distance of 3 billion miles, the high gain antenna boresight, mispointed by 0.2 degrees, would miss Earth by over 10 million miles,” he wrote in his research paper. “The antenna beam width makes up for it, however.”

The ESL anechoic chamber.To describe being inside ESL’s anechoic chamber, imagine a 60-foot by 40-foot by 20-foot room, with every ceiling and wall covered in blue foam triangles. The triangles absorb sound and light, making the environment highly conducive to studying radar frequencies without contamination. The chamber at ESL is considered the largest academic chamber and the finest compact range in the world, operating from 400 MHz up to 100 GHz.

Theunissen also looks back on their work together with pride.

Willie Theunnisen, 2006.“It is a little surreal to think something you worked on for a few years will eventually leave the solar system and go on to potentially outlive the pyramids at Giza,” he said.

For the scientific community, the New Horizons probe remains an achievement in engineering that has already graced the cover of countless tech magazines, as well as National Geographic. For those involved in the creation of the probe, it’s a time of long-anticipated celebration.

“It is very exciting,” he said. “I think it is going to be interesting to see what we can see through the technologies.”

Lee said Schulze and Theunissen conducted two antenna test runs in the anechoic chamber, both lasting about a month.

“They would basically lock themselves in the chamber,” he said. “One thing that caught my attention: Because a spacecraft is spinning while it is traveling, they need to maintain the accuracy of pointing the antenna to the Earth. I was told they required the accuracy of pointing to the Earth at 0.05 degrees. It’s amazing that they can achieve that.”

Moncrief said the work performed at Ohio State remains tied to the success of the mission.

“Everything that we test has to be perfect,” he said. “You could have the most expensive probe in the world; billions of dollars. But if the antenna didn’t work right, especially where (New Horizons) is right now, it would be useless. It would be just a rock in space.”

Launched on Jan. 19, 2006, the New Horizons probe had essentially been in hibernation mode for the past several years. Hibernation, in this case, means traveling at speeds of 31,000 miles per hour and nearly one million miles a day. Communication with the probe was enacted periodically to change its direction. NASA predicts the probe will fly closest to Pluto on July 14, 2015, before heading out to explore the frozen outskirts of the solar system beyond.

“The view will be incredible. If we flew this instrument over Earth, at the same altitude we plan to fly over Pluto, you would see individual buildings and their shapes. There could be all kinds of surprises,” a NASA promotional video declares.

From the same distance over Earth, New Horizons principal investgator Alan Stern said, "You could count the ponds in New York's Central Park."

After exploring Pluto, New Horizons keeps going, documenting the Kuiper belt, a region of the solar system beyond the planets. It also explores the Oort cloud, which is a region loosely bound to the solar system and believed to be the source of many comets.

As Pluto draws closer, Schulze said the mission is now enlightening his children about the possibilities of space study too.

"My older kids (Sophie, 14, and Owen, 12) remember and talk about the time when their dad was away working on the mission to Pluto. I remember telling my daughter she would be in high school when the New Horizons spacecraft would flyby Pluto. She wanted to know why it would take so long," he said. "Well, let me tell you. Finally, this past week, I took my son and daughter to a Family and Friends Celebration of Pluto's encounter. It was an inpirational night for my kids and myself, as we listened to Alan Stern talk about the mission. At the end of the talk, my son enthusiastically asked about future missions to Pluto. My son got a charge out of his answer and is now inspired to study hard in school and has aspirations to lead a future Pluto lander mission."

Read his research paper on the project HERE.

Watch a short video featuring interviews with Jim Moncrief and Teh-Hong Lee, plus footage from the anechoic chamber HERE.

Find out more information about the ElectroScience Lab HERE.

The ElectroScience Laboratory (ESL) is a center-of-excellence in the Department of Electrical and Computer Engineering and one of the largest radio frequency and optics research laboratories in the world. Since 1942, ESL has consistently maintained a national and international preeminence in electromagnetics, influencing radio research like no other institution in the world. ESL faculty, research scientists, and students are involved in all aspects of electromagnetic and RF technologies, including, satellite and ultra-wide-bandwidth communications; optics; remote sensing; ground penetrating radar systems; antenna engineering; electromagnetic compatibility and interference; and computational methods and measurements. A variety of emerging areas are also being pursued, such as those related to bioelectromagnetics, metamaterials, polymers and packaging; micro-device modeling and multi-physics engineering.

Tags: Alumni Awards In the News Faculty Research Students
Share this article on: