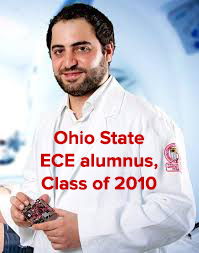 The Ohio State University Department of Electrical and Computer Engineering (ECE) alumnus, Ziad Sankari, was among a short list of global entrepreneurs honored May 11 by President Barack Obama at the White House.

The president brought together emerging entrepreneurs from across the United States and the world to highlight “the importance of investing in women and young entrepreneurs to create innovative solutions to some of the world’s toughest challenges, including poverty, climate change, extremism, as well as access to education and healthcare.”

Watch the video of the president talking about Sankari HERE.

"We want to empower pioneers like Ziad Sankari," Obama said. "Today he is improving the way we respond to cardiac incidents, which will have enormous ramifications, not only in places like Lebanon, but potentially all around the world."

Sankari, of Beirut, Lebanon, earned a dual MS degree in ECE and Biomedical Engineering from Ohio State in 2010.

Sankari recently reached out to his former ECE advisor Bradley Clymer to share the good news of being honored at the White House.

“I take this opportunity to thank you for all the lessons you extended to me,” Sankari told Clymer. “This recognition is a testimony of your coaching and mentorship abilities.”

Clymer said hearing about the honor is one of the benefits of being a professor.

“It is always good to hear of the successes of former students,” he said. “It is why I love teaching.”

While at Ohio State, Sankari earned a United States Fulbright scholarship and worked with some of the leading electrical engineering professors in the field. He graduated and then started the business CardioDiagnostics in 2012.

The story that led to his passion and drive for engineering and healthcare is compelling. At the age of 17, Sankari lost his father to a heart attack. His family lacked access to proper healthcare. Motivated to stop this cycle, he decided to pursue his studies in understanding the electrical activity of the heart and how monitoring and analyzing that activity can save lives.

Sankari’s company now uses FDA-approved wearable devices that are 24/7 GPS-enabled heart rate monitors, allowing for heart monitoring centers to communicate diagnostic and preventive information to patients in the United States and Lebanon, where the center has over 40 total employees.

Returning to Lebanon after graduating from Ohio State, Sankari was selected to pitch his idea at the 2011 Global Innovation through Science and Technology’s (GIST) Tech-I competition where he won first place. Through GIST, a U.S. Department of State funded initiative, Sankari received his first round of seed funding and traveled through various U.S. cities to expand his network, learn how to negotiate and connect with mentors.

Given his experiences, Sankari sees education as essential to successful entrepreneurship and for combating the rising issues of poverty and extremism. He hopes to support other startups and build a high-performing educational system in Lebanon and throughout the Middle East that leverages U.S. expertise and connections to open a world of opportunities to younger generations.

The event on Monday at the White House comes ahead of the President’s travels to this summer’s Global Entrepreneurship Summit in Kenya.