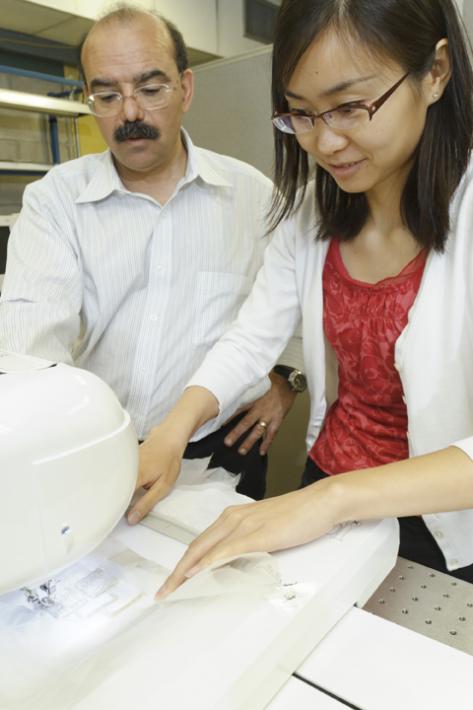 The first project, Omnidirectional Vest-Mounted Body-Worn Antenna System for UHF Operation, was funded by a 1.2 million grant from the Army’s Small Business Innovation Research program, about one-third of which went to Ohio State. The rest went to Applied E.M., a Hampton, Va.-based antenna-design company. The research is spearheaded by Chi-Chih Chen, research associate professor, along with ESL researchers Gil-Young Lee and Dimitrios Psychoudakis. In the current issue of the journal IEEE Antennas and Wireless Propagation Letters, they report a new antenna design with a range four times larger than that of a conventional antenna worn on the body – one that is used by American soldiers today.

The second project, led by John Volakis, Chope Chair professor and director of the ElectroScience Laboratory along with researchers Yakup Bayram, Lanlin Zhang and Zheyu Wang, involves weaving conducting thread into fabric to create antennas. Researchers spent months working with Shirley Harding, an embroidery expert and freelancer with Westerville Sew-N-Save to learn how to embroider the e-fibers correctly so the threads could withstand the frictions of the embroidery machine. The fiber research was funded by a $3.6 million Air Force grant, more than half of which went to Ohio State.

photo: Postdoctoral researcher Lanlin Zhang embroiders metallic thread onto cloth with a sewing machine as John Volakis, Director of the ElectroScience Laboratory at Ohio State University, looks on. Researchers here are partnering with industry to design communications antennas that can be embroidered directly into clothing. Photo by Al Zanyk, courtesy of Ohio State University.